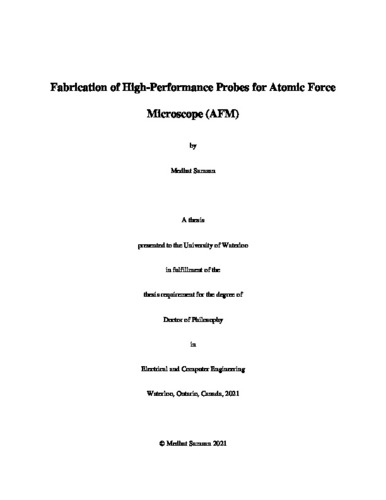 Atomic force microscope (AFM) is widely used for topographical structure characterization. However, one serious issue with AFM imaging is the intrinsic artifact in the AFM image when mapping a none-flat surface (e.g. a deep and narrow hole/trench) where the tip cannot fully follow the sample surface. The natural solution to overcome this issue is by using thin and high aspect ratio (HAR) tips that can follow the sample surface more precisely. This thesis focuses on the fabrication of HAR AFM probes. The HAR tips are obtained by modifying regular AFM tips having a pyramid shape. The high aspect ratio structure in silicon, sitting on top of a pyramid base, is created by a dry plasma etching process, so the key is to form a hard metal dot right on top of the pyramid tip apex to act as the mask for silicon etching. Three approaches were developed to form the hard mask metal nano-dot on the tip apex. The first method (Chapter 3) employed metal deposition steps with the regular tip mounted on a tilted surface, and its etching back to leave behind metal only at the tip apex (the metal on the sidewall of the pyramid was etched away). Since both metal film deposition and its etching, as well as the subsequent dry plasma etching of silicon using the metal as mask to form the HAR structure, can be carried out on an entire wafer of regular AFM tips, this process is a low-cost and high throughput batch process. The second method (Chapter 6) utilized focused ion beam (FIB). FIB has been extensively used to fabricate HAR tips by milling away the silicon surrounding the tip axis, leaving behind a thin pillar or sharp cone of silicon at the pyramid axis. However, the FIB milling time for each tip is long, leading to high cost. Our method used FIB to mill away only a very thin layer of metal film to leave behind a metal dot at tip apex, thus the expensive FIB machine time is greatly reduced. The third method (Chapter 6) also utilized Ga-ion FIB, but instead of milling a metal dot mask pattern, the Ga ions were implanted to the tip apex area to act as a mask since Ga metal is resistant to fluorine-based plasma etching. For the above three approaches, silicon etching is very critical, so Chapter 5 covers our effort in developing silicon etching recipes using a non-switching pseudo-Bosch process with C4F8-SF6 gas, with a goal of obtaining vertical sidewall profile needed for HAR, high selectivity to mask, and high etching rate. As well, the etched silicon structures must be further sharpened to reduce its apex radius to below 10nm. So, Chapter 4 covers the process optimization of the oxidation sharpening process that involves thermal oxidation and subsequent oxide etching by HF. It was found that 950°C is a suitable oxidation temperature, and the oxidation sharpening can be carried out more than once to improve tip sharpness. Lastly, inspired by the first approach described above, we also developed the fabrication process for “edge probe”, for which the tip apex sits right at the end of the cantilever, and thus the tip location can be precisely determined in the view of the integrated optical microscope in an AFM system. Our method involves angle evaporation of a hard mask layer onto the AFM probe, followed by silicon dry etching that etches away the area not covered by the metal layer, i.e., the shadow area of the pyramid-shaped tip.