The Re-amortization Act: A Material Durational Agenda for Conservation 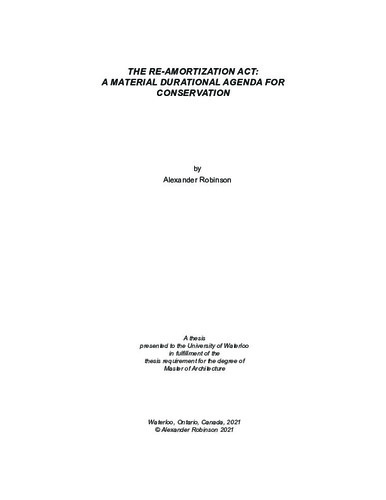 With the urgency of the climate crisis, we need to begin thinking of new systems that properly value the existing embodied energy invested in Toronto’s built forms, challenging existing neoliberal patterns of development, where existing buildings are demolished due to land value and future densification of a site. Current legislation in Toronto has fallen short of addressing the energetic material cycle of buildings as a tool to address climate change. Instead, legislation such as the Toronto Green standard focuses on the LEED points system for building reuse. In this points system material reuse and adaptation rank considerably lower than other measures such as operational energy. Furthermore, the current highest material value system in Toronto, the Ontario Heritage Act, focuses on historically narrative-driven criteria, a nostalgic and aesthetic-based agenda. These current models for the continuation of materials fail to address the large stock of post-industrial and modernist buildings worthy of keeping with the pressure to densify the city. In response, this thesis will look at bridging heritage and sustainability legislation through the designing of a new perspective for the urbanism of our cities; the concept of a Re-Amortization Act, an experimental political act that will focus on re-valuing material energy invested in existing buildings rather than just historical narrative and aesthetic values. The opening chapter will contextualize historical ideas of conservation and bring us into the current discourses around conservation and Life Cycle Analysis. Chapter 2 gives an annotated insert of the proposed Re-Amortization Act laying out the specific criteria needed to meet its three main categorizations (Remain, Adapt & Disassemble) along with their associated material output & input restrictions. Also included is a description of the radical net embodied energy measures that the experimental Act seeks to reduce carbon input in future designs significantly. Chapter 3 illustrates the three categories with a series of emblematic precedents ranging from least extreme net embodied energy material usage to most extreme, along with the associated deconstruction and material technologies used. Emerging from this body of research is the pragmatic understanding of how a material durational agenda such as this can be achieved, along with the architect’s role within it, and the importance of material continuation for both addressing the dual cultural and environmental crises.