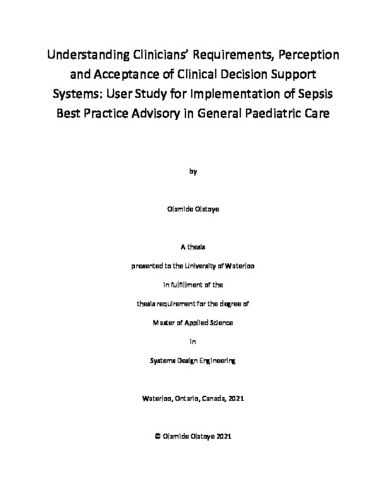 Clinicians are faced with ever-increasing patient data as well as medical evidence which are all required for them to make the best possible decisions. Clinical Decision Support Systems (CDSS) are widely used to support clinicians’ information processing and decision making. However, clinicians as end users are hardly involved in the design and development of these decision support tools. In addition, some of these CDSS designs and processes are not properly implemented to fit into the clinicians’ workflow. The study specifically investigated clinicians’ decision-making regarding Sepsis, design and workflow requirements as well as their perception and acceptance of the Sepsis best practice advisory (BPA). Sepsis is a life-threatening disease, and it is important to identify early manifestations rapidly and reliably for timely interventions as every hour of delay increases mortality by 5-10% (37). The aim was to identify the factors that can aid the implementation of the CDSS such that there is no reduced or incorrect usage and interference with clinicians’ decision making. Successful implementation of the CDSS can further improve patient’s safety especially with regards to Sepsis care. The study was in two phases, a user interview and a moderated usability testing. Both phases were qualitative studies obtaining data from a total of 13 participants from a target population of clinicians working in the general paediatrics unit of the hospital. Decision ladders from control task analysis (ConTa) and cognitive work analysis (CWA) were used to model clinicians’ decision making and the support provided by the Sepsis BPA. The unified theory of acceptance and use of technology (UTUAT) was used to measure clinicians’ satisfaction and acceptance of the tool. The first phase of the study discovered the general experience, knowledge, challenges caring for patients with Sepsis as well as experiences with CDSS and clinicians’ projections or expectations of the Sepsis BPA. Key findings were translated into user requirements which were checked against the minimum viable product (MVP) of the Sepsis BPA and recommendations provided. The second phase discovered particular design feedback and usability issues on the MVP with more recommendations provided. The UTAUT survey results showed highly positive feedback on satisfaction, acceptance and intentions of clinicians to use the Sepsis BPA.