Projecting the Hydrological and Geochemical Evolution of a Constructed Fen Watershed in the Athabasca Oil Sands Region, Alberta, Canada 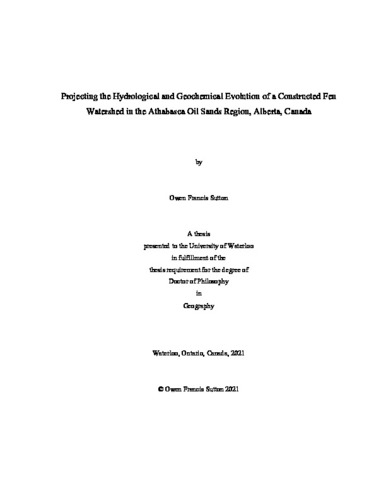 Ongoing commercial bitumen surface mining operations have fundamentally altered large areas of forested uplands and fen peatlands in the Athabasca Oil Sands Region (AOSR), Alberta, Canada. Returning fen peatland functions that are representative of the pre-disturbance state has become a matter of increasing public interest, and has been adopted into the regulatory framework. Prompted by the prevalence of fens on the undisturbed landscape, this regulatory framework has recently mandated the trial of fen peatland reclamation at the pilot-scale to assess the viability of including these ecosystems in mine closure planning. It was hypothesized that the creation of a surrogate fen that exhibited many of the same functional traits as a natural system could be accomplished by providing a reasonable approximation of the hydrogeologic setting of peatlands characteristic to the region. This principle guided the conceptual design of the Nikanotee Fen Watershed, one of the pioneering experimental watersheds built on the post-mined landscape. The design of this pilot project incorporated an upland aquifer capable of supplying the peatland with a consistent source of water. Construction of the site was completed in January 2013, and used a combination of salvaged, process-affected, and engineered materials. Residual concentrations of sodium and other solutes imparted to the coarse tailings sand aquifer material during the bitumen extraction process, introduced the potential for rooting zone salinization that could negatively impact fen vegetation. Initial assessments of the Nikanotee Fen Watershed demonstrated that in the early post-construction period the site was functioning in accordance with the design. However, meaningful changes in the function of the system will occur as the site matures due to soil evolution, vegetation development, and the progressive transport of solutes from the upland to the fen. The timeline that these processes will evolve on preclude purely observational research and require the use of techniques that can project hydrologic behaviour into the future as the site matures. Generating information on the future efficacy of the Nikanotee Fen Watershed will be crucial to informing mine operators and reclamation planners of the viability of fen reclamation. Assessing the probable trajectory of the upland and fen was accomplished using field data, laboratory experiments, and numerical modelling. The impact of the evolving upland in the short-term (due to soil weathering) and the long-term (due to vegetation development) was investigated with soil moisture dynamics modelling. Next, a thorough characterization of the hydraulic properties that influence the fate and transport of sodium from the tailings sand aquifer was conducted with a field-scale tracer test, and laboratory experiments. Finally, the likely developmental pathway of the fen was evaluated by integrating information from the previous research into a groundwater flow and solute transport model of the watershed. These studies have (1) illustrated the impact of weathering on the soil hydraulic properties and water balance fluxes of cover soils in the early post-construction period; (2) demonstrated the value of snowmelt for recharging groundwater in the reclaimed uplands and improved the understanding of the relationship between cover soil systems and vegetation growth; (3) identified the hydraulic and transport properties of coarse tailings sand – a material that will be ubiquitous on the closure landscape; and (4) provided a novel evaluation of the hydrochemical trajectory of a constructed peatland watershed with respect to water availability and sodium concentrations, which upheld the original conceptual design, and strongly suggested that the system will continue to support fen ecohydrological function. This research represents one of the first comprehensive attempts to illuminate the probable developmental pathway of a fen reclamation pilot project in a post-mined landscape. The Nikanotee Fen Watershed has accomplished many of its epistemic goals associated with the generation of research and operational knowledge, and ultimately, appears poised to replicate fen ecohydrological function into the future by successfully regulating the limited available moisture, and managing the salinity from process-affected materials.