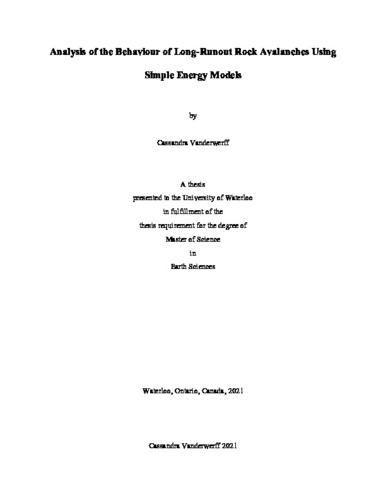 Rock avalanches are a natural hazard of fragmented rock with extreme geomorphological impact and cause significant amounts of damage to the human population. This thesis develops and evaluates simple physics-based energy models to explain the high mobility of rock avalanches and to expand upon preceding research. A review of relevant literature is presented, and five major research topics are addressed. First, it is shown that the numerous models that have been adopted for avalanche fragmentation are not in consistent agreement about the energy spent during this process. Second, there appears to be a lack of consensus regarding whether entrainment of path substrate materials induces a gain or loss in energy is gained or lost from this behaviour. Third, it has been typically assumed that the apparent coefficient of friction for a rock avalanche remains constant – which is likely false. Fourth, it is shown that the environment, geology, degree of lateral confinement and failure mechanism are key variables that control the horizontal travel distance travelled yet are rarely accounted for in various models. Lastly, this thesis shows, through a preliminary analysis of a Galileo Scaling relationship between volume and the horizontal travel distance, that rock avalanche databases are scant in data, limiting analyses. Simple physics energy models were considered to examine rock avalanche behaviour as it pertains to the horizontal distance travelled. The simple physics energy models considered are sliding, entrainment, deposition, fragmentation, and impact. The simple sliding energy model examined the sliding motion exhibited by rock avalanches and the entrainment energy model considered the mass gained during an event. The deposition energy model examined mass loss and the fragmentation energy model observed the energy required to break a rock mass. Lastly, the impact energy model examined the energy lost when the failure mass impacts a lower slope. From the simple physics energy models, it was concluded that the horizontal distance travelled by a rock avalanche is not mass-dependent. Rather, the horizontal distance travelled appears to be dependent on the percentage of mass gained or lost with respect to the initial mass. Further, it was determined from the entrainment and fragmentation energy models that Heim’s Ratio is not a sufficient assumption for the apparent coefficient of friction value. A preliminary statistical analysis provided further insight into Galileo Scaling and its relation to rock avalanches. It was determined that there was a square-cube scaling relationship between the volume and horizontal distance travelled by a rock avalanche. This relationship was further examined through smaller datasets. By constraining the data into datasets of analogous events, the scatter reduced. With further research, this could be developed into an empirical model to potentially predict rock avalanche travel distances.