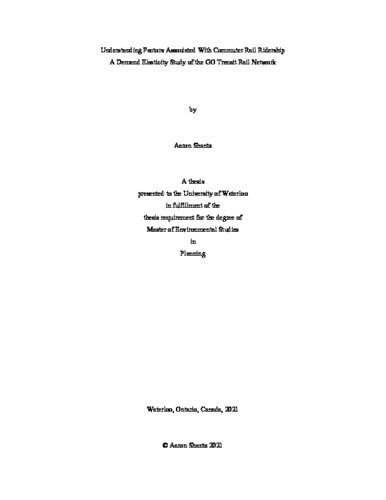 Mode share in major North American cities is currently dominated by private automobile use. Planners have theorized that transitioning commuter rail systems to regional rail networks is a viable method to increase ridership and stabilize mode share. This process is currently underway in Ontario, Canada, as the amount and frequency of service is being increased throughout the GO Transit rail network via the GO Expansion Program. However, previous studies have shown that transit demand does not solely respond to service quantity expansions. Variables related to the built environment, regional economy, network characteristics, and socioeconomic status of the customer base can influence transit demand to varying degrees. Further, the literature states that the travel behavior of commuter rail users is unique, as access mode, distance, socioeconomic status, and the utility derived from varying trip types can differ compared to local transit users. These findings suggest that supplementary policies might be needed to reduce automobile reliance and stimulate demand for regional transit. Many transit researchers have conducted demand elasticity studies to identify what factors are significantly associated with transit ridership. However, no researcher has conducted this type of analysis specific to the GO Transit rail system. The purpose of this thesis is to fill this gap. Through literature review, variables significantly associated with transit demand were first identified. Station-level datasets were then compiled at monthly intervals from January 2016 to December 2019. During this process, station catchment areas estimated using PRESTO smartcard data were used to extract data related to land use, socioeconomic, and demographic indicators. Additional factors related to station access, service quantity, and availability of substitute transport modes were also compiled. A random effect linear panel data estimator was then applied to obtain demand elasticity estimates. Of the variables included in the analysis, this study finds that several variables such as service quantity, population density, fuel price, and unemployment rate are significantly associated with transit demand, regardless of trip type examined. Ridership was also responsive to employment density and seasonal variation, although differing signs were shown depending on trip type examined. Surprisingly, demand was relatively unresponsive to enhanced station access options, including park and ride capacity and the quality of feeder bus connections. The results suggest that policies in addition to the service quantity improvements as outlined in the GO Expansion Program should be considered to further increase system demand. Those aimed towards heightened densities and land use diversities around rail stations, increasing the cost of private automobile operation, and the implementation of competitive fare price strategies are outlined. Notably, desktop research revealed that policies related to these factors have been previously explored by provincial stakeholders. However, only service improvements as proposed within the GO Expansion Program have been committed too. Knowing that demand is responsive to these factors could increase the level of political willingness needed to implement these policies to further increase ridership and subsequently balance mode share. These findings could also be used by Metrolinx to justify the allocation of resources needed to update or implement policies within the study area. Overall, this study highlights that many factors, including those related to the built environment, network characteristics, and the price / availability of substitute transport options are significantly associated with commuter rail demand. Therefore, integrated planning policies should be considered by transit agencies undergoing similar network transitions to ensure that ridership is increased to the greatest extent possible.