Shanghai lilong: an intertwined relationship between the dwellers & the architecture 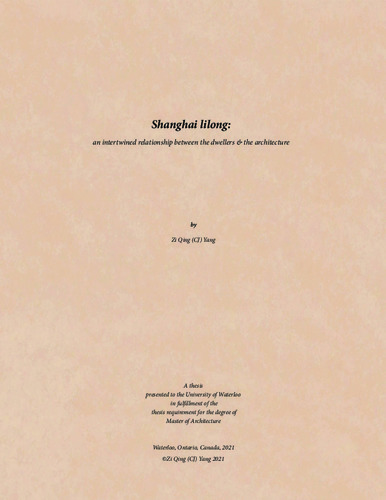 The thesis investigates the lilong neighbourhoods of Shanghai, known for their high-density housing organized around narrow longtangs (alleyways), during the 1970s and 1980s. It unfolds the intertwining relationship between the dwellers and their living environment through analyzing the spatial transformations in relation to the residents’ everyday life. It asks how the architecture was integrated into people’s lives, and how the people both consciously and unconsciously influenced their spatial and material environment over time. Lilong, as one of the most common low-rise residential typologies of old Shanghai, was placed under extreme pressure from the rapid population densification and the city’s lack of housing availability during the 1970s and 1980s. Units that were designed for one family began to accommodate multiple families at the same time. As a consequence of the crowded interior, residents extended their everyday activities into the shared spaces of lilong, unconsciously blurring the separation between private and public. They also started to make architectural modifications on the interior and the exterior. These informal structures were essential gestures to overcome the lack of interior space, which became inseparable from the everyday activities of the residents. Each adaptation also added layers of visual and programmatic complexity to the neighbourhood. Together, the traces of these modifications embodied the process of a lilong’s growth over decades. Since the 1990s, large swaths of lilong neighbourhoods have vanished due to the rapid urban regeneration of Shanghai. As more people started to live in towers, the memory of these highly social, diverse, and active neighbourhoods gradually faded away. This thesis acts as a form of record of the collective memory of lilong dwellings during the 1970s and 1980s. Currently, there are many studies that focus either on the architectural typology or the social aspects of lilong. Nevertheless, not enough resources explore the intricacy of lilong that lies within the synergy between the dwellers and the architecture. This study offers a documentation that begins to fill in this gap of knowledge, by arguing in contrast to these existing studies, that social patterns of dwellings and the built environment are inseparable. It borrows an approach from anthropology and ethnography in order to study this synergy as a dynamic living system. This thesis explores the transformations by categorizing them into three major topics: “movements and activities”, “objects and transformations”, and “the spatial boundaries.” The methodology it used to retrieve primary resource was to carry out interviews with residents who have lived in a lilong during the 1970s and 1980s so that the thesis material drew directly upon first-hand experiences. The information collected formed the basis for the drawings in this thesis. In order to reconstruct the architectural and urban spatial characteristics of the lilong, I also cross-referenced archival photographs, literature, street views, and documentaries. These drawings are imaginative reconstructions of the life of lilong expressed as a set of visual representations, each paired with anecdotes and quotes collected from the interviews. The thesis uses lilong as a case study to understand how architecture set up people to live together, what blurring the private and public realms looks like, and how a neighbourhood develops into a highly diverse and social environment. Rather than seeing architecture as formal artifacts, the study begins to reveal dwellings as a process, as a way of life. This research values and substantiates the importance of traces, the adaptations and transformations that are accumulated through time, which marked the history of the neighbourhood’s growth. Finally, reflecting on the knowledge outcomes, the thesis material suggests possible ways to translate the lessons of the 1970s and 1980s lilong forward into the future.