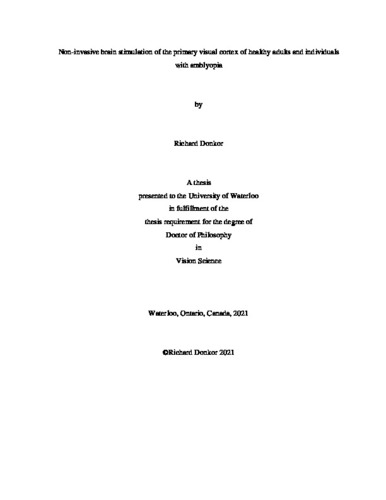 Introduction: Amblyopia is a neurological condition that affects the visual cortex and causes visual deficits, typically in one eye. Recovery from amblyopia requires significant visual cortex neuroplasticity to allow for changes in cortical processing. Non-invasive brain stimulation (NIBS) is a technique that can modulate cortical excitability and neurotransmitter concentration within superficial regions of the human brain, including the primary visual cortex. Recent studies have demonstrated that the application of NIBS to the visual cortex can promote neural plasticity and may enable recovery of vision. The overall goal of this thesis was to investigate whether repeated sessions of visual cortex NIBS could improve vision in adults with amblyopia. To achieve this goal, three specific objectives were pursued: (I) Identify the effective transcranial electrical stimulation (tES) protocol for modulating visual function in healthy adults, (II) determine whether primary visual cortex transcranial random noise stimulation (tRNS) alters cortical excitability in adults with normal vision as measured by VEPs, and (III) assess whether repeated primary visual cortex tRNS sessions could improve visual acuity and contrast sensitivity in adults with amblyopia. Experiment – I: The purpose of this pilot study was to compare the effects of visual cortex anodal transcranial direct current stimulation (a-tDCS), tRNS and sham stimulation on contrast sensitivity in healthy adults. The objective was to identify the effective stimulation type for experiments II and III. The study also served as an initial pilot of a new NIBS system and contrast sensitivity measurement protocol. Within a small sample of healthy adults (n = 6 per group), no differences were observed between stimulation conditions. tRNS was chosen for subsequent experiments based on trends in the data and the available literature. Experiment – II: We tested the hypothesis that visual cortex tRNS would induce an acute increase in the amplitude of pattern-reversal VEPs in healthy adults (n = 10). The purpose of this experiment was to test for an electrophysiological effect of tRNS in healthy adults because experiment-I had not revealed a psychophysical effect. We found that for measurements made directly after active tRNS stimulation, significantly increased VEP amplitudes for parietal electrodes relative to sham treatment. Increased VEP amplitudes following tRNS suggest that tRNS acts to increase visual cortex excitability. Experiment – III: We tested the hypothesis that five daily sessions of visual cortex transcranial random noise stimulation would improve contrast sensitivity, crowded and uncrowded visual acuity in adults with amblyopia. Nineteen adults with amblyopia were randomly allocated to active or sham tRNS of the visual cortex (active, n = 9; sham, n = 10). Sixteen participants completed the study (n = 8 per group). tRNS was delivered for 25 minutes across five consecutive days. Monocular contrast sensitivity, uncrowded and crowded visual acuity were measured before, during, 5 minutes and 30 minutes post stimulation on each day. Active tRNS significantly improved contrast sensitivity and uncrowded visual acuity for both amblyopic and fellow eyes whereas sham stimulation had no effect. An analysis of the day-by-day effects revealed large within session improvements on day 1 for the active group that waned across subsequent days. No long-lasting (multi-day) improvements were observed for contrast sensitivity, however a long-lasting improvement in uncrowded visual acuity in amblyopic eyes was observed for the active group. No effect of tRNS was observed for crowded visual acuity in amblyopic eyes. In agreement with previous non-invasive brain stimulation studies using different techniques, tRNS induced short-term contrast sensitivity improvements in adult amblyopic eyes, however, repeated sessions of tRNS did not lead to enhanced or long-lasting effects for the majority of outcome measures. Conclusion: Our findings buttress the existing reports of improved vision in amblyopia following NIBS of the visual cortex. In agreement with previous non-invasive brain stimulation studies, our results demonstrated considerable short-term plasticity within the visual cortex of human adults with amblyopia. Future research should integrate modification of stimulation parameters across repeated sessions aiming to increase the cumulative effects induced by NIBS.