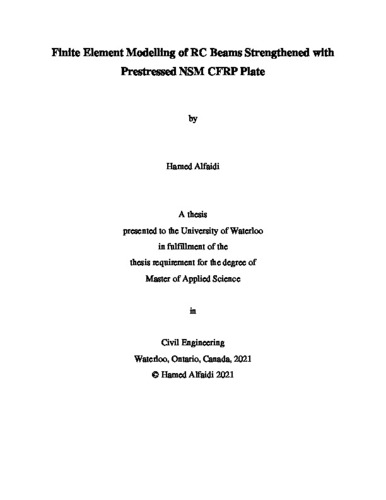 Near Surface mounted (NSM) carbon fibre reinforced polymer (CFRP) reinforcement has become a promising flexural strengthening technique for reinforced concrete (RC) elements. The prestressing of a CFRP plate can be used to provide RC members with further enhancements in the flexural capacity. The aim of this study was to introduce a three-dimensional nonlinear finite element analysis (FEA) of RC beam strengthened by prestressed CFRP plate. Although there is a wide range of commercial programs for three-dimensional nonlinear FEA, they have different capabilities to model complex behaviour of composite materials such as RC beams strengthened with prestressed CFRP plate and the contact interaction. Therefore, the ABAQUS finite element package was used in this study due to its known accuracy to model the behaviour of a variety of materials such as concrete and its powerful contact algorithms. Concrete material was modelled using concrete damage plasticity (CDP) constitutive model, and steel reinforcements were modelled as elastic-perfectly plastic material. The CFRP plate was modelled as perfectly elastic material that fails at maximum tensile strain. Perfect bond was assumed between concrete and steel reinforcement, and a contact model was used to represent the behaviour between concrete and the CFRP plate. The results of the FEA were validated against experiment results reported in the literature. The results were compared in terms of the load-deflection behaviour, crack patterns, and mode of failure (rupture or debonding of CFRP plate). Based on the validation, the proposed FEA model was capable of capturing the behaviour of RC beams strengthened with prestressed CFRP plate. A parametric study was conducted to investigate the effect of prestressing levels, steel grades, and thickness, width, and length of the CFRP plate. It was observed that increasing prestressing of the CFRP plate improved the strength of the RC beam especially for the ultimate load. However, as the prestressing increased, the mode of failure changed to the rupture of the CFRP plate which limited further increase of the ultimate load. Using a higher steel grade improved the load carrying capacity. Increasing the width of the CFRP plate improved the load carrying capacity by delaying the debonding at the CFRP-concrete interface. Increasing CFRP plate thickness further improved the load carrying capacity of the beam. Increasing the length of the CFRP plate developed the general load carrying capacity; however, it was found that covering 25% of the shear span of RC beams provided sufficient and cost effective strengthening. The FE model offers a reasonable representation of the experimental results for load-deflection curve, failure modes and crack patterns.