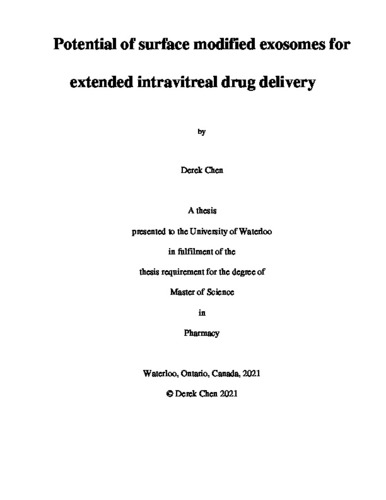 Diabetic retinopathy is a serious condition affecting retinal cells that can lead to blindness. Intravitreal injection is the only feasible method of drug delivery to the retina. However, intravitreal injections are only suitable for drugs with large therapeutic indices and long half-lives (the anti-VEGF agents). Drugs with less favourable properties would require multiple injections a week and are thus unfeasible to use. Still, the success of a monthly injection treatment plan of anti-VEGF agents is limited by compliance. There is a need to improve intravitreal drug delivery systems to reduce injection frequency and allow for delivery of molecules with unfavourable pharmacokinetics, such as small molecule drugs. Nanotechnology is a tool that can be used in drug delivery to improve properties such as drug solubility and stability. Exosomes are cell-derived nanoparticles which have recently shown promise as drug delivery vehicles, exhibiting favourable properties such as biocompatibility, drug loading and release, targeting, and cell uptake. In addition, click chemistry methods have been developed for surface modification of exosomes. Restriction of diffusion in the vitreous is a promising strategy to decrease drug clearance, potentially allowing for reduced injection frequency and delivery of small molecule drugs. To restrict diffusion, use of hyaluronan-binding domains to bind the omnipresent hyaluronan found in the vitreous is an encouraging strategy. However, there is a need to carefully select and optimize these hyaluronan-binding domains for their application in a nanoparticle-based drug delivery system. Of the multiple different hyaluronan-binding domains, peptides based on the B-(X7)-B motif appeared as a candidate that could be optimized using in-silico molecular docking techniques. In this project, exosomes were isolated from retinal pigment epithelial cell culture using affinity capture and differential ultracentrifugation and characterized for their size, zeta potential, morphology, cell uptake, and drug loading abilities. Molecular docking was used to find and design peptides (based on the B-(X7)-B motif) with affinity to hyaluronan. Exosomes were conjugated with the candidate peptide using click chemistry and then evaluated in an in-vitro diffusion cell model to evaluate the effect of peptide conjugation. For both isolation methods, characterization indicated size distributions and mean diameter, negative zeta potential, CD63 presence, and round morphology, within the expected characteristics of exosomes. Of the two isolation methods, ultracentrifugation was deemed superior due to its reported ease of use, yield, and functionality. Fluorescently labeled exosomes qualitatively displayed time-dependent cell uptake into retinal pigment epithelial cells in culture. Given the biological function of exosomes as paracrine communicators, these results are expected. However, given the multitude of retinal cells affected in diabetic retinopathy, it might be more useful to quantitate exosome uptake in other retinal cell lines. Molecular docking revealed that slight modifications to the B-(X7)-B motif could result in greater affinity to hyaluronan. However, optimization is still needed to maximize hyaluronan-binding affinity. The conjugation chemistry was validated by use of a fluorophore. However, it was inconclusive as to whether peptide conjugation affected exosome diffusion within the diffusion cell model. Additional investigation studies and optimizations are required to elucidate the effect of peptide conjugation on exosome diffusion in the vitreous. This work will help in the development of both extended intravitreal drug delivery systems and exosome-based drug delivery systems.