Challenging Collaborative Consumption at a Critical Juncture: Airbnb in the Matrix of Gentrification and Colonization 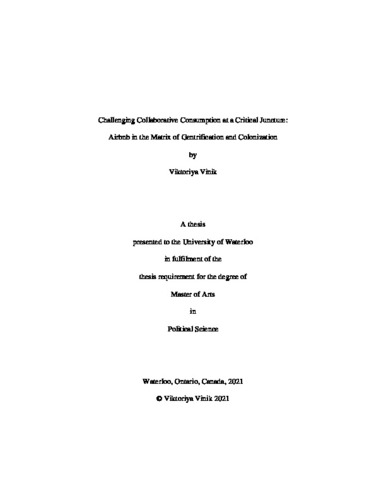 Ten years since the nationwide J14 housing protests against Israel’s increasing cost of living, affordable housing remains just as scarce, even prompting some city-dwellers to seek cheaper living in West Bank settlements – a military-occupied Palestinian Territory. Given that Israel is often called the Start-Up Nation, Airbnb’s rise in Tel Aviv-Yaffo and West Bank settlements was exceptional. Thus, my thesis aims to determine Airbnb’s role in the Tel Aviv-Yaffo housing crisis and the West Bank settlement economy. My research demonstrates the ways in which Airbnb accelerates the existing historic trends in Tel Aviv-Yaffo and the West Bank by introducing new capital flows via the sharing platforms. While existing Israeli literature on Airbnb’s activity in Tel Aviv-Yaffo has done an adequate job of addressing the phenomenon as a policy and legal issue, none have understood it within Israel-Palestine’s gentrification-colonization matrix. My contribution is applying Anglo gentrification literature to consider how these activities unfold in particular ways within Israel-Palestine’s unique colonial context. Through a post-colonial lens, my thesis reveals how Airbnb has exacerbated the housing crisis by converting residential units into illegal hotels, displaced marginalized Jews in south Tel Aviv-Yaffo, turned human rights violations into tourist attractions, and further displaced Palestinian Arabs living both within and outside the Green Line.

Viktoriya Vinik (2021). Challenging Collaborative Consumption at a Critical Juncture: Airbnb in the Matrix of Gentrification and Colonization. UWSpace. http://hdl.handle.net/10012/16927