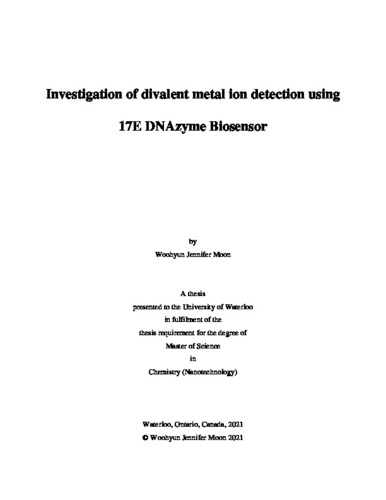 DNAzymes are in vitro selected oligonucleotides that can catalyze reactions, such as RNA cleavage. Most DNAzymes require metal ions as cofactors. Unlike ribozymes, which have been found in nature, all known DNAzymes are artificially selected from a pool of random nucleotide sequences by narrowing down specific sequences that exhibit the desired activities. Since the first reported selection, the field of research has exploded to examine its fundamental properties and potential applicability as a biosensor and therapeutic agent. 17E is one of the most extensively examined RNA-cleaving DNAzymes to date. The catalytic activity is observed to be the highest in the presence of Pb2+ as a cofactor. As a result, many studies have focused their attention on Pb2+. However, it exhibits varying degrees of catalytic activities in the presence of various divalent metals. The mechanism of which different metal ions assist with the RNA-cleaving reaction is still in debate. Further understanding of the DNAzyme activities in the presence of different metal ions, in a buffered environment as well as in complex samples, can provide valuable information for designing systems that utilize DNAzymes. Throughout the studies in this thesis, various aspects of the divalent metal ions and their interaction with the 17E DNAzyme are probed. Briefly, the phosphorothioate substitution at the pro-Rp position of the non-bridging oxygen significantly decreased cleavage activity while the pro-Sp position was unaffected for less thiophilic metals, such as Mg2+, Mn2+, and Co2+. This indicates that the pro-Rp position at the cleavage site plays an important role. However, thiophilic metals, such as Cd2+, did not show significantly different activity between the Rp and Sp isomers. Water ligand exchange rates were also found to be correlated to the observed cleavage rates, which may suggest an inner-sphere coordination mechanism. Inhibition by the free phosphate was also quantified and found to correlate to the rate constants of each metal ion, which indirectly indicates that the metal-phosphate affinity correlates to the cleavage activity. Comparing to the available mechanism data for Pb2+ with 8-17 DNAzymes, it can be suggested that other divalent metal ions work via a different mechanism than Pb2+. While Pb2+ cleaves the RNA cleavage site by a general acid/base mechanism, other divalent metals are suggested to act as Lewis acids. Screening of different transition metals found that Fe2+ exhibits high activity with 17E and the metal was studied in more depth. While Fe3+ shows no activity, maintaining the oxidation state of Fe2+ in an inert atmosphere or the presence of reducing agents could cleave the substrate with the DNAzyme. Studies with ribozymes reported that Fe2+ could replace Mg2+ and this observation provides insights about the role of Fe2+ in the early earth. Comparison with different DNAzymes that are active with Mg2+ found that Fe2+ can also replace Mg2+ for DNAzymes as well. The Fe2+ increased the reaction rates compared to Mg2+ by 21-fold for 17E, 25-fold for 8-17, and 1-fold for E5. pH higher than 7.2 was found to degrade the DNA in the presence of high Fe2+ concentration. The use of reducing agents, such as ascorbate, or N2 environment could reduce oxidation to Fe3+ which does not exhibit any cleavage reaction activities. For detecting metal ions in more complex samples, metal-protein binding interaction may be affecting the overall observed DNAzyme activity by decreasing the effective metal concentrations. Examining the model protein of bovine serum albumin (BSA) and its interaction with different metal ions, the decreased DNAzyme activities were correlated to the BSA-metal binding. Fluorescence polarization assay results indicated minimal binding of the BSA with the 17E DNAzyme, but longer NaH1 DNAzyme was observed to bind with the protein. These observations identify the need to consider protein-metal interaction when designing intracellular DNAzyme biosensors for metal quantification. Throughout this thesis, aspects concerning the divalent metal ion detection using the 17E DNAzyme as a biosensor are carefully examined to further our fundamental understanding. Mainly, the mechanism of metal-phosphate interaction is probed. Fe2+ behaviour with the 17E DNAzymes was also examined for the first time. Understanding the metal-dependent activities and the interaction with proteins in complex samples can guide improved biosensor designs for future applications.