Understanding the effect of objective function weightings on posture prediction: application to predicting lifting postures in un-fatigued and fatigued states 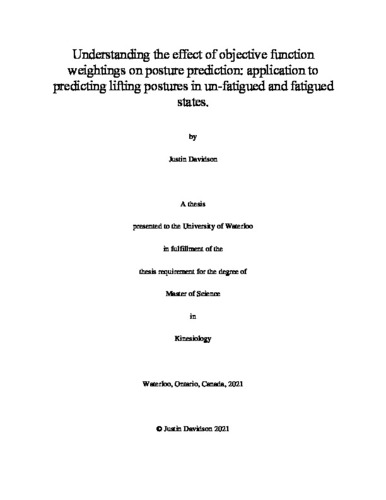 Physical prototyping is often required when developing new equipment and workspaces so that human-systems integration can be considered. Digital human modelling facilitates more efficient, upstream assessment of human interactions with new equipment within a virtual environment. However, predicting how humans will behave (i.e., move and position) to perform industry relevant tasks, requires the ability to consider state-based influences, like fatigue, on predicted behaviours (Davidson, Graham, Beck, Marler, & Fischer, 2021). The overarching objective of this thesis was to understand how objective function weightings should be configured within a multi-objective task-focused human behaviour prediction model to simulate postures within a floor-to-shoulder height lifting task under different fatigue states. To achieve this aim, simulated lifting postures were generated by systematically altering objective function weightings where each simulation was compared with experimentally captured lifting posture data to determine the closest match and subsequent ideal optimal weighting configuration. Fifteen participants were recruited and completed a lifting protocol at 30% of their EPIC predicted maximum box lifting capacity. Participant fatigue level was evaluated based on their RPE and task completion time. Changes in participants lifting strategy over the course of the fatigue lifting protocol was also verified. Participants who were deemed fatigued and exhibited movement strategy changes were included in the simulation portion of the thesis where participant’s first and last lift kinematic data were used as inputs to a multi-objective optimization digital human model. Avatar’s were generated to match participant anthropometry and were constrained to maintain the same hand and foot position as the participants. Simulations were run while altering three objective functions including the minimization of: Discomfort, Total Joint Torque and, Maximum Joint Torque. The different objective functions represent performance measures to be minimized in order to predict the design variables, in this case joint angles, within the avatar’s available degrees of freedom. Simulations were run for objective function weighting coefficients between 0-100% at 10% intervals for each subject, each posture and each fatigue state. Each simulation was compared to the simulation that was generated using the participant-specific motion capture data and the error between the motion capture and optimization predicted data were calculated. A total root mean squared error (RMSE) value was calculated including the ankle, knee, hip, trunk, shoulder, and elbow errors. Error was modeled as a function of objective function weightings using participant specific multivariate regression equations. Multivariate regression equations were then used to determine the objective function weighting configuration that would results in the lowest error for each participant, at lift origin and destination and for un-fatigued and fatigued lifting states. A two-way repeated measures Friedman’s test was used to detect for difference in optimal objective functions weightings between locations (origin vs. destination) and fatigue state (un-fatigued vs. fatigued lift). Results showed a median objective function weighting of sixty, zero, and zero for the discomfort, maximum joint torque and total joint torque objective functions, respectively. Friedman’s test did not detect significant differences between fatigue states or location for any of the three objective function weightings. The discomfort objective function alone tended to predict box lifting postures best. Discomfort may include aspects of the torque based objective functions leading to its increased priority for predicting postures over the minimization of maximum and total joint torque. Future studies should build on the current suite of objective functions to improve predictive capabilities of digital human models for novel tasks. More accurate digital human models will allow for earlier consideration of humans-in-the-loop and significantly reduce industry costs of physical prototypes.