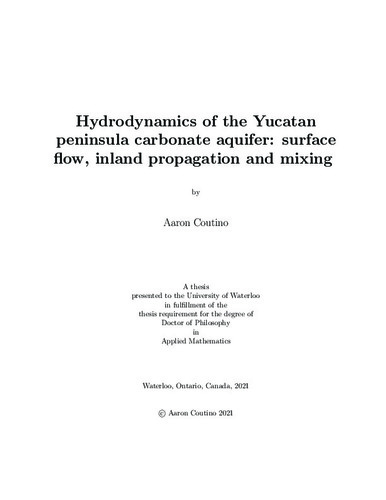 This thesis is a collection of three investigations into the hydrodynamics and hydrogeology of the Yucatan Peninsula, Mexico. The first investigation models potential mangrove-groundwater interactions as a box model. We use field sensor data to calculate various parameters and use the model to show that the proposed mangrove flooding mechanism can reproduce the observed effects. The second investigation reports on tidal oscillations detected within far inland water bodies of the Yucatan Peninsula. The tidal records were verified using null hypothesis testing. This result has major implications for the region as it indicates that previously thought to be isolated water bodies are in fact directly connected to the grater aquifer and thus the ocean. The proposed mechanism to allow such far in land oscillations is the presence of large fracture zones in the rock throughout the peninsula which may allow the pressure wave to easily propagate. The third investigation simulates a potential mixing event within the Yucatan aquifer, specifically within one of the many cave passages throughout the region. Parameters (Sc, `fudge factor') were varied to better understand the dynamics of this system and how common approximations made for the sake of computational efficiency affect the dynamics. We found that while there is some leeway with the numerical choice of Schmidt number and `fudge' factor (constant factor increasing all diffusivities), making large changes to these values leads to growing differences in energy calculations which are particularly important for mixing. Reductions in initial density difference (i.e. temperature profile) showed a significant dynamical difference compared to the base case. Particularly, differences in how the instability manifests and its effects on the density beyond the initial range created were observed. Together these studies help build a better understanding of the dynamics within the Yucatan aquifer particularly within the large caves and conduits where traditional porous media theory does not apply.