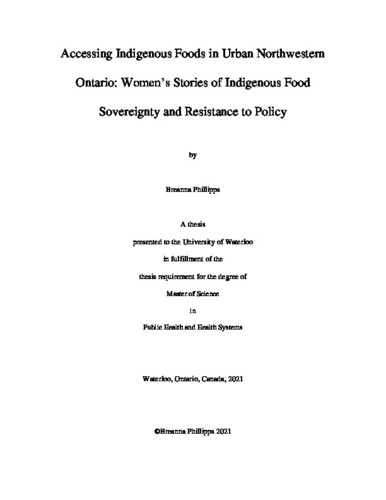 Indigenous populations living in urban northern Ontario have been repeatedly ignored in research regarding Indigenous Peoples food insecurity and food systems, despite the large proportion of Indigenous Peoples living in the region and the unique challenges of the urban northern food environment. The purpose of this thesis is to explore and better understand how Indigenous Peoples in the urban northwestern Ontario service hubs of Sioux Lookout and Thunder Bay access Indigenous foods and the relationship of Indigenous food to their food security and Indigenous food sovereignty. The methodology of this project is based upon on the principles of community-based participatory research, intersectional feminist theory, and the USAI Framework (utility, self-voicing, access, and inter-relationality). Data were collected in open-ended interviews with stakeholders from three groups across the two cities (1) Indigenous female community members (n=6), (2) non-Indigenous staff of Indigenous-serving organizations (n=6), and (3) policymakers (i.e. those related to wild food policy or its implementation)(n=6). Two analyses were conducted. First, a thematic analysis of interview data from Indigenous community members and non-Indigenous staff of Indigenous-serving organizations characterized the impact of place and urbanicity on accessing Indigenous foods in both urban northwestern Ontario cities. Second, an Intersectionality-Based Policy Analysis framework was applied to analyze interview data from the entire sample which illuminated how the provincial and federal policy contexts have historically and continue to impact Indigenous women and their communities’ experiences of accessing wild foods in urban northwestern Ontario. Both place and urbanicity are central to how Indigenous populations in these towns harvest, share, and consume their Indigenous foods. On the community and individual levels, Indigenous Peoples in these towns are often in situations of food insecurity due to financial, geography, and policy barriers. Participants highlighted the abundance of ways that Indigenous food sovereignty is being expressed. Building food networks and sharing practices amongst friends, family, and broader communities (both inside and outside the city) was central to promoting access to Indigenous food for Indigenous Peoples in this study. Indigenous women pointed to colonial policies which make it impossible for most people to harvest in a self-determined way; thus, resistance is necessary. We found that stakeholder groups defined the policy problem differently and brought different values to their place in the systems which impede or facilitate access to wild foods. There was an acknowledgment of the conflict of Western food safety and natural resource management principles with Indigenous rights and Indigenous food sovereignty in theory and application. Implementation of food and natural resource policy is often unclear due to the tensions of government jurisdiction and the erasure of Indigenous Peoples’ experiences within Canadian cities. This thesis reiterates that Indigenous-led and culturally safe collaborations between the Indigenous community and other organizations are critical to improving Indigenous food sovereignty in these urban settings. Illuminating the non-Indigenous actors’ understandings of Indigenous Peoples' food security and sovereignty in urban settings is key as they hold power in colonial institutions. There is a continued need for Indigenous distinctions-based and intersectional approaches in all policy at all levels – from the federal to the institutional.