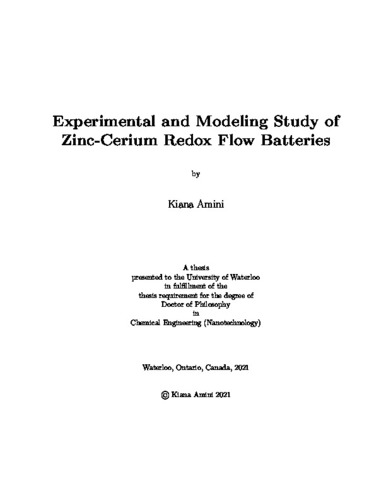 Redox flow batteries (RFBs) are one of the most promising energy storage technologies that are expected to have an increasing market size in the near future due to their scalability, safety, long-life and system flexibility. The development of RFBs will facilitate the utilization of clean renewable sources of energy, such as sun and wind power, by resolving their intermittency problem. RFBs are also capable of enhancing the stability of the electrical grid by storing the excess electrical power and releasing it during peak hours of electricity demand. Among different types of RFBs, those based on zinc and cerium metals are attractive since they offer a large open-circuit cell voltage and thus have the potential to provide high output energy density. Motivated by these advantages, the present work is focused on the improvement of zinc-cerium RFBs through both experimental and modeling studies. In this work, in situ polarization and electrochemical impedance spectroscopy measurements were combined to accurately identify the sources of voltage loss in each half-cells of the zinc-cerium RFBs during battery operation. This analysis revealed that the kinetic losses at the zinc negative half-cell are responsible for most of the voltage drop at low and intermediate current densities, while limitations to the mass transfer of Ce(IV)/Ce(III) on the positive side are the main reasons for the sharp potential drop at high current densities. At 50% state of the charge, the exchange current density for zinc oxidation was estimated to be 7.4 mA cm-2, while the corresponding value for cerium reduction was found to be 24.2 mA cm-2, confirming that the slower kinetics of the negative half-cell limited the battery performance at low and mid-range current densities. Next, extensive life-cycle analyses were performed to pinpoint the exact cause of the battery capacity fade over multi-cycle experiments. Combination of in situ monitoring of the half-cell electrode potentials and colorimetric titration revealed that the combination of hydrogen evolution side reaction (HER) in the negative half-cell, crossover of protons, and accumulation of Ce(IV) in the positive electrolyte results in the eventual capacity fade of the system. The research contributions outlined above underpin the rest of the work, where a novel electrolyte is designed to increase the kinetic rate of the Zn/Zn(II) redox reaction and enhance the charge and voltage efficiency of the zinc redox reaction and consequently the full-cell battery at low and intermediate current densities. Extensive half-cell potentiometric and galvanostatic electrochemical techniques revealed that the amount of zinc deposited, charge, voltage and energy efficiencies of Zn/Zn(II) always remain significantly higher in an alternative mixed methanesulfonate-chloride negative electrolyte compared to the conventional methanesulfonic acid (MSA) solutions. Given these promising half-cell studies, the electrolyte was further tested in a bench-scale zinc-cerium RFB and the results showed that a zinc-cerium RFB with this new electrolyte has a significantly longer life and notably higher charge and voltage efficiencies compared to conventional zinc-cerium RFBs. Whereas the battery containing pure MSA negative electrolyte was able to operate for 42 h with 97 cycles at a current density of 25 mA cm, it was able to operate for more than 75 h with 166 cycles when mixed MSA-chloride was used on the negative side. Lastly, to simulate the operation of zinc-cerium RFBs, a two-dimensional transient model accounting for three modes of transport (migration, diffusion and convection) coupled with electrode kinetics was developed. The developed model was validated against the above-described extensive set of experimental data. This included full-cell voltages, positive and negative electrode potentials monitored via reference electrodes inserted into the battery set-up and Ce(IV) concentrations in the positive electrolyte measured by colorimetric titration over multi-cycle experiments. This was the most comprehensive comparison carried out between the output of an RFB model and experimental data extracted during operation of a redox flow battery. The validated model was then used to predict the cell voltages and limiting redox reactions during battery operation for different model parameters to provide a direction toward improving the performance of zinc-cerium RFBs.