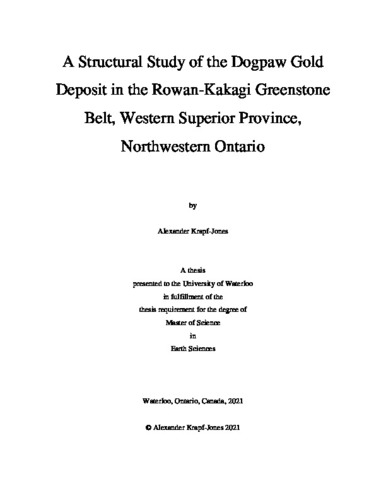 Thesis after edits from editor (13.36Mb)

The Dogpaw deposit is a structurally controlled gold deposit hosted in the Neoarchean, Rowan-Kakagi greenstone belt of the Western Wabigoon of the Superior Province. The Rowan-Kakagi greenstone belt consists of two metavolcanic terranes separated by the crustal-scale, Pipestone-Cameron fault zone: 1) the Kakagi Lake volcanic terrane, which hosts the Dogpaw gold deposit, and 2) the Rowan Lake volcanic terrane. A number of reported gold occurrences in the Rowan-Kakagi greenstone belt are spatially associated with the Pipestone-Cameron fault zone. Bedrock mapping along the trend of the Pipestone-Cameron fault zone in the Dogpaw-Flint Lake map area has revealed a network of faults which consists of a major, dominantly dextral, east-southeast striking deformation zone and a network of secondary faults with compatible kinematics. At the Dogpaw deposit the bulk of gold mineralization is expressed at surface as lodes of quartz-pyrite breccia veins and sheeted, quartz-carbonate veins hosted in a network of ductile to brittle-ductile, conjugate shear zones which occur at the upper succession of a layered mafic to ultramafic sill. These conjugate shear zones developed due to broadly, north-south directed compression during deformation and their distribution is controlled by the primary, textural heterogeneity of the hosting rock. These gold-hosting structures where subsequently overprinted by a subsidiary structure of the Pipestone-Cameron fault zone, the Dalby Bay shear zone, deforming the early geometry of the deposits. The Dalby Bay shear zone is interpreted as a secondary deformation zone of the Pipestone-Cameron fault zone based on compatible kinematics and identical style of deformation. Four samples were collected for LA-ICP-MS U-Pb analysis at the Dogpaw deposit. Weighted mean 207Pb/206Pb zircon ages were yielded from two samples collected from late-tectonic, quartz-feldspar porphyry dykes. These dykes crosscut both veins of high-grade gold and are themselves deformed within the boundaries of the Dalby Bay shear zone. Results from the analysis of sampled dykes provide a minimum age constraint on the timing of gold mineralization at the Dogpaw deposit at approximately 2694 to 2696 Ma. Results from the analysis of a sample collected from the hosting intrusion provides a maximum timing on gold mineralization at approximately 2717 Ma. These geochronology results, coupled with the U/Pb dating and mapping by previous workers, provides new constraints on gold mineralization, deformation and igneous activity in the Rowan-Kakagi greenstone belt.