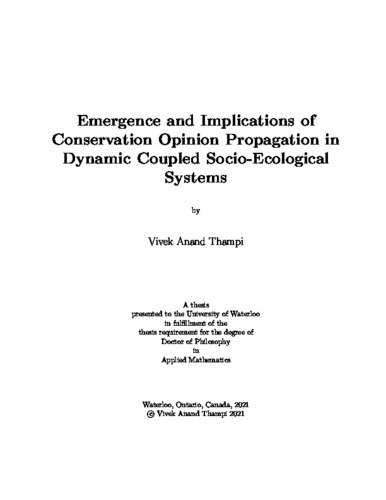 Human behaviour is rarely a static phenomenon. In life, individuals are presented with choices that define the trajectories they will experience days, weeks or months later. As an example consider farmer decision-making and orchard dynamics. If an avocado orchard is well taken care of, a bountiful harvest can lead to a lower price of avocados that will more easily attract grocers to stock the product. Alternatively, if the orchard is not properly cared for, avocado prices can surge (due to their low supply) and become a greater risk for grocers, causing them to seek other suppliers. If a particular 'care' routine is developed by the farmer, this can have a significant impact on the long-term trajectories of orchard dynamics. From this simple example, it is clear how dynamic human behaviour can interact with environmental system dynamics. This motivates the potential value of capturing this interaction in mathematical modelling. In this thesis, we develop two different coupled human-environment system (CHES) models that incorporate a dynamic feedback loop mechanism to link human impact and environmental system responses and vice versa. The first model is developed using a game-theoretic approach to describe dynamics of opinion spread. The model is then coupled to a previously established coral reef ecosystem model. We investigate the effects of key factors such as social learning, social norms, and exploitation rate on the trajectories predicted by the model. We discover stable regimes that are made possible by the presence of human coupling and we identify the potentially harmful role of social norms. In the second model, we utilize a similar game-theoretic approach to couple a dynamic human component to a previously established grassland model of the Southeastern Australian grasslands. The aim of this model is to determine conditions that suppress invasive exotic grasses, in the presence of human feedback that determines how strongly the local population mitigates its own pollution. Finally, we conduct a systematic review of the CHES modelling literature between May 2009 and April 2019 using the Web of Knowledge and PUBMED databases. Results reveal an increasing trend in the number of mathematical models using a CHES approach. Results also show that these models utilize a wide range of techniques of varying complexity. In general, most work focuses on agricultural systems. We postulate that application to other environmental systems is relatively unexplored and can be implemented using techniques similar to those of the models developed in this thesis, or via adaptations of other modelling techniques from different fields of research. We suggest that including dynamic human behaviour is necessary in order to improve existing environmental policies and improve the predictive power of mathematical modelling techniques in environmental systems research.