Frequency and Voltage Control of a Grid of Microgrids 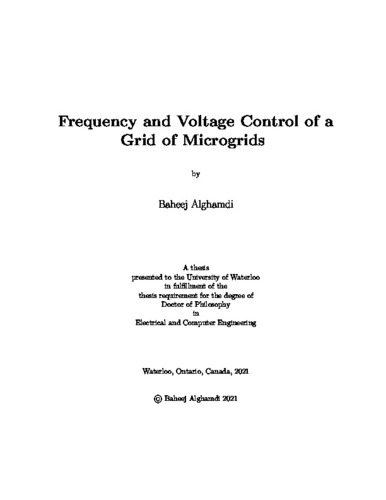 The rapid proliferation of Distributed Energy Resources (DERs) in recent years has resulted in significant technical challenges for power system operators and planners, mainly due to the particular characteristics of some of these systems that are interfaced with converters that alter the dynamic behavior of typically power systems. To accommodate the increasing penetration of DERs in power systems, microgrids have been formed to facilitate their integration. The operation of these microgrids could be further enhanced by interconnecting them to satisfy the overall system demand, and improve their stability if suitable control schemes are implemented. The control of microgrids has been extensively studied; however, coordinated operation, dynamics, and control of a grid that includes interconnected microgrids have not been sufficiently addressed in the literature, and thus this is the focus of this thesis. In the first stage of the thesis, a new microgrid interface based on Virtual Synchronous Generators (VSGs) is proposed to control the power exchange of interconnected ac and dc microgrids, and provide frequency support, voltage regulation, and virtual inertia for individual microgrids and the host grid as required, to improve both frequency and voltage dynamics for the overall system. Thus, a hierarchical distributed control technique is proposed, where the primary control of interfacing VSGs provides adaptive inertia for the ac systems, while a secondary distributed control of the system regulates the frequency and the voltages of the host grid and the interconnected microgrids, based on a consensus technique with limited information about the overall system. The proposed controller shares the total system load among the grid and microgrids, while minimizing the overall frequency and voltage deviations in all interconnected systems. The proposed interface and the controller are implemented, tested, and validated in detailed simulations for a grid-of-microgrids system. In the second stage of the thesis, an adaptive active power droop controller and voltage setpoint control in isolated microgrids for optimal frequency response and stability after disturbances is first proposed and presented, and then applied to the coordinated control of interconnected microgrids. The control scheme involves an optimal and model predictive control approach, which continuously adjusts the active power droop gains and the voltage setpoints of Distributed Energy Resources (DERs) to maintain the frequency of the system within acceptable limits, and enhance the primary frequency response of the system, while taking into account the active power sensitivity of the microgrid loads to the system's operating voltage. The proposed approach is also implemented, tested, validated, and compared via detailed simulations in a microgrid benchmark system and the developed grid-of-microgrids test system. The results demonstrate that the proposed VSG controlled interfaces limit severe frequency deviations during disturbances, and allow proper power sharing among the microgrids without causing significant power transients for the ac/dc systems, compared to existing techniques. Furthermore, the proposed secondary distributed and centralized frequency and voltage controllers maintain the power balance of the interconnected systems and regulate the microgrids' frequencies and dc voltages to nominal values, compared to conventional frequency controllers; however, the distributed control approach shows better overall frequency and dc-voltage dynamics and regulation than the centralized control approach.