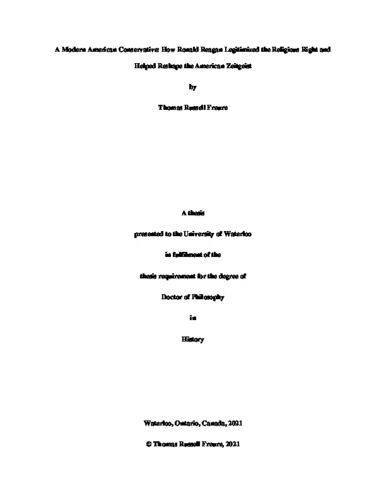 The late 20th century saw the rise of three closely related phenomena: modern American conservatism, Ronald Reagan, and right-wing Christianity. This dissertation explores the ascent and convergence of these three forces, which combined to bring about a remarkable shift in the American zeitgeist during the 1980s. This transformation was characterized by a fusion of conservative religion and politics, most evident in the swift upsurge of the Religious Right, a loose coalition of religious-based political action groups, founded by fundamentalist and evangelical leaders with the assistance of conservative political activists. Over the course of Reagan’s presidency, the movement and its “moral agenda” became a significant factor in United States politics and an influential force within the Republican Party. Key to this ascendance was the role played by Reagan himself, who held a more complete interpretation of modern American conservative ideology than has been recognized. This nuanced view helped facilitate his relationship with the Religious Right. Though their understanding of the Christian religion and God was not always congruent, Reagan and evangelicals and fundamentalists shared similar values and spoke the same language regarding moral, social, and cultural expectations. Reagan and his administration publicly supported and actively worked to advance the movement’s moral agenda, fostering an environment conducive to Religious Right values. In the process he legitimized these activists and the social issues they advocated for in the public and political spheres, something that was, at least in the long term, as or more valuable than any political legislation, and in doing so reshaped the national discourse, the modern American conservative movement, and the Republican Party.