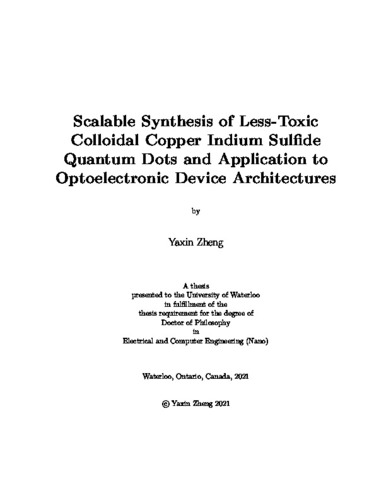 The consequences of mankind’s extravagant energy consumption has loomed over humanity for much of the twenty-first century. As societies realize the increasing urgency of transitioning to renewable energy sources, solar energy has been progressively adopted worldwide. Like most electronic devices, solar cells, photodetectors, and other commercial light sensing and management devices are primarily based on silicon. Due to disadvantageous intrinsic traits, silicon is inefficient at optoelectronic applications. Significant efforts have been exerted towards the discovery and implementation of alternative semiconductor materials. However, due to its abundance and compatibility with established manufacturing processes, silicon has proved difficult to dethrone. In the last two decades, application of nanomaterials have become a particularly notable topic among device and electrical engineers. For solar cells, the utility of nanomaterials occupy an area known as “Third Generation” solar cells, which is defined by the use of novel architectures and materials to overcome the intrinsic limits of bulk semiconductor materials. Among nanomaterials applied for light management devices, quantum dots (QDs) are one of the most significant areas of research. High-performance photovoltaic (PV), photodetector, light emitting, and other light management devices have been achieved from QDs, which have now graduated from the realm of research devices to commercial application. Early successes were primarily achieved using Cd- and Pb-based QDs. Still to this day, the best performance benchmarks in photovoltaics and photodetectors have been set by PbS QDs. However, the known toxicity of these elements poses significant controversy in their adaptation, precluding their commercialization. This thesis explores the application of less-toxic copper indium sulfide (CIS) QDs for photovoltaic and photodetector device architectures. Although less investigated than binary QD materials, cupric chalcopyrites display significant optical and structural properties that are flexibly tuned for a variety of applications. In this work, a low-temperature, one- pot, non-injection, temperature-ramped method is presented for high-throughput synthesis of CIS QDs. Exploration of cationic stoichiometry and temperature conditions yielded a comprehensive model to explain the properties and behaviours displayed by the QDs during synthesis and application. CIS/ZnS core/shell QDs were developed from these QDs, resulting in increased tunability, higher stability, and enhanced emission intensity and life- time. This synthesis procedure reliably yielded QDs tunable from visible to near-infrared (544-800 nm), with photoluminescence quantum yield (PLQY) of up to 20% for core/shell QDs. Furthermore, a synthesis process is presented for zinc copper indium sulfide (ZCIS) QDs, a more stable quaternary variant of CIS QDs incorporating Zn passivation within the core. As the Type I core/shell configuration formed by the CIS/ZnS QDs poses issues with carrier confinement and transport, it cannot be utilized for device purposes. Inspired by the benefits of zinc incorporation for core CIS QD stability, zinc alloying was devised as a method to leverage the benefits of zinc incorporation. A similar one-pot, low-temperature ZCIS synthesis procedure was developed, which reliably produced almost 1 g of intensely emissive ZCIS QDs. Cationic stoichiometry and overcoating were investigated to elucidate their effect on the QD lattice and subsequent parameters. A ligand-exchange process is presented, allowing the functionalization of the as-synthesized, solution-dispersed colloidal QDs for compatibility with film formation. Long, non-polar 1-dodecanethiol (DDT) ligands, which are critical to the scalable one-pot synthesis, were exchanged for short, polar 3-mercaptopropionic acid (MPA) ligands, which allowed the formation of uniform QD solids onto ZnO surfaces. This ligand functionalization is integral to the utility of the QDs in the advantageous metal oxide/QD heterojunction device structure. QD film formation methods were further explored to determine film formation parameters and practices that would best aid in the production of uniform, regular CIS QD solids of sufficient thickness. Sputtered and sol-gel ZnO films were also investigated for enhancement of the ZnO/CIS QD interface. ZnO/CIS QD diodes were fabricated to evaluate the results of the film development processes. Devices with diodic I-V behaviour and response to illumination were achieved. The key to silicon’s persistent presence in the optoelectronics industry is the fabrication processes and techniques utilized in device production, which have evolved to be insepara- ble from its use. Although many novel materials and architectures have been developed for photovoltaic and photodetector devices, their inability to depose silicon stems from their incompatibility with existing manufacturing practices. For nanomaterials and QDs, the nonchalant manner in which they are applied to device fabrication in research and prototyping environments draws doubt of their performance, leading to reluctance for commercial acceptance. Therefore, the establishment of repeatable, reliable, standard fabrication procedures for nanomaterial devices is a significant tenet of this thesis work. Through photolithography and shadow mask patterning, small, regular, 5 μm-diameter device areas were defined onto standard 2.2 × 2.2 cm2 substrates. All steps of the fabrication process were designed to be compatible with existing industry fabrication technologies, paving a smoother transition to commercial production. This work yielded small-area ZnO/CIS QD heterojunction devices on standard substrates, with strong response to illumination. The processes and technologies developed in this work are applicable in the investigation and formation of a variety of nanomaterials-based electronic and optoelectronic devices, amenable to the realization of commercially feasible nanodevices.