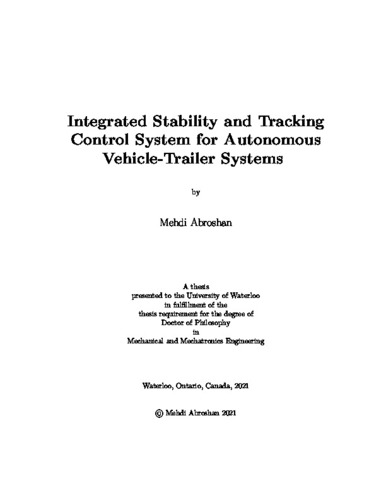 The addition of a trailer to a vehicle significantly changes the dynamics of a single-vehicle and generates new instability modes including jackknifing and snaking. Understanding of the dynamics of these modes leads to the development of more effective control strategies for improved stability and handling. In addition, vehicle-trailer systems suffer from the off-tracking problem meaning that the path of the trailer rear end differs from that of the vehicle front end. Off-tracking makes these vehicles less maneuverable and increases swept path of the vehicle, especially in urban areas and tight spaces. Vehicle active safety systems have been extensively developed over the past decades to improve vehicle handling and assist the driver to keep the vehicle under control in unfavorable driving situations. Such active safety systems, however, are not well developed for vehicle-trailer systems specialty to control the above-mentioned instability modes. In addition to the above active safety systems, off-tracking of vehicle-trailers is another aspect that is essential in path planning and path tracking of autonomous vehicle-trailers. In this thesis, first, phase portraits are used to study the non-linear dynamics of the system through state trajectories and equilibrium point locations of a vehicle-trailer system, with respect to the inputs and also the loading conditions of the trailer. By the study of the phase portraits, the foundation of the vehicle-trailer yaw instability is recognized and a two-dimensional stable region as the stability envelope is defined. This stability envelope is utilized to prevent unnecessary control interventions while the vehicle is operating in the safe stability region whereas the controller is allowed to effectively interfere when the vehicle crosses the stability envelope. To handle multiple control actions in the vehicle and trailer units, a control structure with two hierarchical layers is proposed. In the upper layer, a model predictive controller is formulated as a quadratic optimization problem with a virtual control action for each degree of freedom of the vehicle dynamic model. In this formulation, the developed stability envelope is constructed as state constraints along with control action constraints. In the lower layer, a control allocation approach optimally transforms the virtual control actions provided by the upper layer into steering and/or braking commands for each wheel. In this approach, actuator failure in addition to actuator and tire capacity constraints is taken into account in real-time. A hybrid A*-based motion planning is developed to generate a trajectory while considering the trailer effect in terms of stability in high speed and off-tracking in high curvature paths. The proposed motion planning utilizes a hybrid A* algorithm combined with potential fields to find a feasible and collision-free trajectory for the vehicle-trailer system. To assess the performance of the proposed control structure in instability prevention both in snaking and jackknifing, different simulations are conducted using different control actions. Additionally, the fault tolerance and robustness of the proposed controller are investigated. To validate the real-time performance of the proposed control strategy, experimental tests are performed on a vehicle-trailer system with differential braking capability. The results show that the proposed control strategy is able to effectively prevent both instability modes as well as unnecessary engagement of the control action to reduce control intervention. The performance of the developed motion planning module is also evaluated for normal driving, obstacle avoidance, off-tracking compensation, and crash mitigation using high-fidility Carsim model. It is observed that proposed motion planning is able to effectively satisfy all the expected requirements.