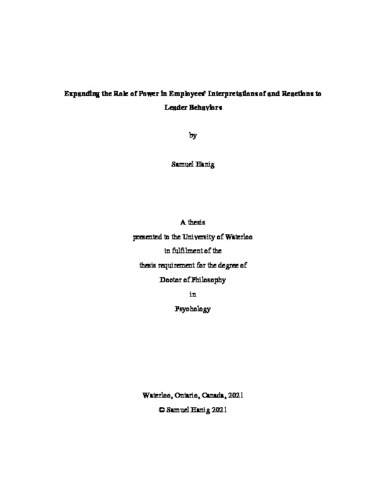 Though research on the impact of leader behaviors is generally grounded in the notion that organizational leaders hold formal power over subordinate employees, this conceptualization overlooks the power that employees may experience in the workplace that does not stem from the formal organizational hierarchy. However, with a growing body of theory and research on the psychology of power and informal sources of organizational power, it is possible to broaden our understanding of the role of power in the leadership process. Across two essays, this dissertation explores how employee experiences of power shape their interpretations of and reactions to leader behaviors. Essay 1 considers the well-established connection between abusive supervision and employee supervisor-directed deviance. Though it is understood that engaging in supervisor-directed deviance is dependent on the supervisor-employee power differential, prior accounts of this reaction to abusive supervision have overlooked the role played by power embedded in employees’ informal social context. To address this gap, Essay 1 draws on power-dependence theory, the approach-inhibition theory of power, and uses a social network approach to explain the link between abusive supervision and supervisor-directed deviance. In doing so, a three-way interaction is proposed, in which the abuse-deviance relationship is impacted by two components of informal power: social network centrality and influence of subordinate employees. In particular, it is predicted that the relationship will be the strongest when subordinates have high social network centrality and high influence. This prediction was tested through the collection of full social network data, as well as employee self-report surveys. The results provide support for the notion that supervisor-directed deviance emerges most strongly as a consequence of abusive supervision for employees who wield informal power in their organization. Essay 2 concerns the construct of psychological empowerment, which is positioned in this essay as the cognitive manifestation of personal power in the workplace. While psychological empowerment is commonly framed as an outcome of leadership, Essay 2 builds on a growing body of work which demonstrates that the individual characteristics of employees can influence their ratings of leadership behaviors. A longitudinal crossed-lagged research design was employed over 9 months to determine the extent to which psychological empowerment predicts ratings of leadership, while controlling for reciprocal effects. Through an integration of psychological empowerment with the approach-inhibition theory of power, it was predicted that psychological empowerment would be positively associated with ratings of empowering leadership and negatively associated with ratings of abusive supervision. The findings support these predications and further provide evidence that the effect of psychological empowerment on ratings of empowering leadership is mediated by the experience of positive affect at work, an indicator of behavioral approach system activation. It is suggested that the findings generally support the account offered by the approach-inhibition theory of power on how psychological empowerment may impact one’s experience of leadership.

Samuel Hanig (2021). Expanding the Role of Power in Employees’ Interpretations of and Reactions to Leader Behaviors. UWSpace. http://hdl.handle.net/10012/16875