Gender Differences in Control Intervention Use: A Population-Based Cohort Study of Acute Psychiatric Hospital Patients in Ontario, Canada between 2006-2018 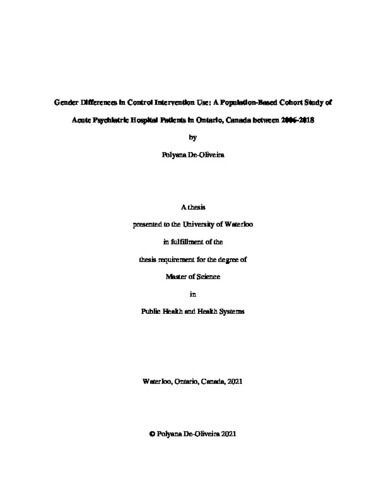 Background: Both gender differences (GDs) have been explored in various areas of mental health including disease epidemiology, treatment, risk factors and community engagement. However, few articles examine GDs in quality of mental health care and even fewer studies of quality mental health care examine process indicators. Methods: This population-based cohort study examined GDs in CIs among the adult acute inpatient psychiatry admissions in Ontario. The first aim of this study is to understand patterns of a process indicator over time by gender. The process indicators selected were control interventions (CIs) applied among inpatients in acute psychiatric settings across Ontario. The second aim is to investigate which demographic, clinical and behavioural factors are associated with the use of CIs for men compared to women. Analysis: Data from the Ontario Mental Health Reporting System (OMHRS), based on the RAI-Mental Health Assessment System (RAI-MH) tool, was collected from every adult patient admitted to psychiatry units in Ontario. De-identified data from patients admitted between 2006-2018 were collected from CIHI, according to their data sharing agreement. Both a gender-stratified descriptive analysis, and a multivariable logistic regression were performed to understand the GDs in demographic, clinical and behavioural factors associated with the application of CIs. Results: Use of both restraint and confinement was more common among men compared to women. In addition, the logistic regression identified that odds of restraints/confinement are increased by levels of aggression, mania symptoms, interpersonal conflict, neurocognitive disorders, stimulant use and age for both men and women. Men were at a greater odds of CIs for stimulant use, neurocognitive disorder, mania, interpersonal conflict and moderate risk of harm to others. At the highest level of risk of harm to others, and when exhibiting wandering and elopement behaviours, women were at a greater odds of experiencing CIs. Abnormal thoughts, involuntary admission and history of criminal activity being associated with CI use for men only. Hallucinations were associated with CI use for women, but not men. The odds of CI use were decreased by history of trauma, challenging social relationships, and self-harm behaviours for both genders. Overall, these results identified GDs in patterns of restraint/confinement use among psychiatric inpatients and supports the continued aim to employ least-restraint approaches in across mental health systems in Ontario, as well as evidence of the application of behaviour-based assessment tools in preventing/mitigating the use of CIs.