From Industrial District to Interface City: Re-imagining the Corrugated Metal Sheds of Taiwan 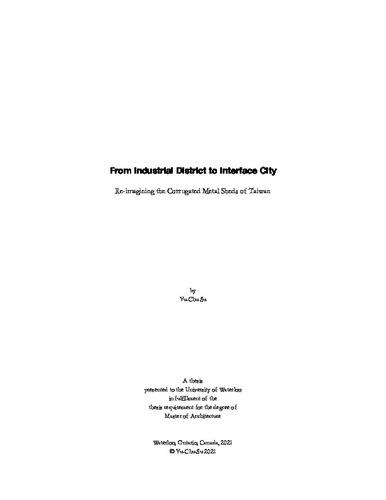 Manufacturing industries are on the decline in Taiwan, leaving many of the island’s corrugated metal warehouses and factories at the risk of being replaced by more profitable high-rise towers. The result is a gentrification of neighbourhoods, the consolidation of capital, and the exacerbation of inequality between working classes. Additionally, in the context of Taiwan’s economically sustained status quo, the spaces of production play a critical role in manifesting the autonomy and identity of the island. The corrugated metal shed, as an architectural typology, has not only facilitated Taiwan’s economic transformation but, through its widespread construction, it has since become an integral part of the island’s urban and rural landscapes. It is in this context that this thesis seeks to re-imagine our current modes of land speculation and asks: how should the redevelopment of corrugated metal sheds in Taiwan respond not only to changing economic conditions but also vernacular-sociocultural practices and sustainable socio-political objectives? Building on an existing conversation between the global and the local within architectural discourse today, the research references key political and urban theory texts, and use mapping, drawing, modelling, and photographs to investigate the role of architecture as both the agent of a globalized economy and the locus of local identities. In the design work, the thesis focuses on an incremental process of urban redevelopment to propose a new type of industrial district – an Interface City. The proposal re-imagines the site of Wenzhai Zun, located on the outskirts of Taipei, into an intersection point between global economic city-regions, between domestic and productive life, between industrial and post-industrial work, and between vernacular built environments and universal building types. The aim of the Interface City is to create not only a viable economy but also a more equitable society. Ultimately, the objective of this thesis is to use the context of Taiwan as a testing ground for new design processes and solutions in the face of deindustrializing cities around the world today.