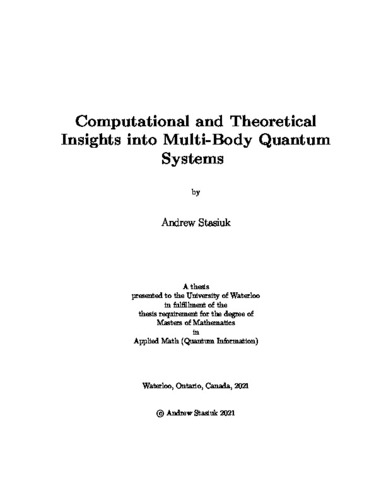 In generality, perfect predictions of the structure and dynamics of multi-body quantum systems are few and far between. As experimental design advances and becomes more refined, experimentally probing the interactions of multiple quantum systems has become commonplace. Predicting this behavior is not a ``one size fits all" problem, and has lead to the inception of a multitude of successful theoretical techniques which have made precise and verifiable predictions through, in many cases, clever approximations and assumptions. As the state-of-the-art pushes the quantum frontier to new experimental regimes, many of the old techniques become invalid, and there is often no tractable methodology to fall back on. This work focuses on expanding the theoretical techniques for making predictions in newly accessible experimental regimes. The transport of quantum information in a room-temperature dipolar spin network is veritably diffusive in nature, but much less is known about the transport properties of such a sample at low temperatures. This work presupposes that diffusion is still a good model for incoherent transport at low temperatures, and proposes a new method to calculate its diffusion coefficient. The diffusion coefficient is reported as a function of the temperature of the ensemble. Further, the interaction of an i.i.d. spin ensemble with a quantized electromagnetic field has long been analyzed via restriction to the Dicke subspace implicit in the Holstein--Primakoff approximation, as well as other within other approximations. This work reanalyzes the conditions under which such a restriction is valid. In regimes where it is shownt that restricting to the Dicke subspace would be invalid, the Hamiltonian structure is thoroughly analyzed. Various predictions can be made by appealing to a reduction in effective dimensionality via a direct sum decomposition. The main theme of the techniques utilized throughout this work is to appeal to a reduction in difficulty via various theoretical tools in order to prepare for an otherwise intractable computational analysis. Computational insights due to this technique have then gone on to motivate directly provable theoretical results, which might otherwise have remained hidden behind the complexity of the structure and dynamics of a multi-body quantum system.