THE MYTH OF DISENCHANTMENT: RELIGION AND THE ENVIRONMENT IN CONTEMPORARY AMERICAN LITERATURE 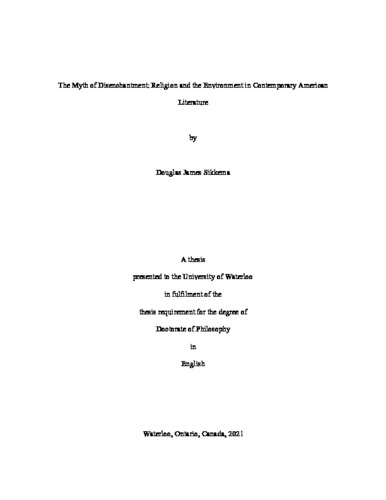 In the following project, I look closely at three living American writers whose work explores the important relations between the religious and ecocritical “turns” in American literature, with particular attention to ways religious belief might inform human understandings and interaction with the material world. The opening chapter explores the ways that the human-nature relationship is configured in a post-Enlightenment “secular” age that has given rise to the current Anthropocene era. Alongside Charles Taylor, I argue that the secular age is funded by a narrative, or lived “myth,” of disenchantment that has left many ill-at-ease with the ongoing destruction of the natural world. This uneasiness has led many to envision new “myths,” or narratives, of re-enchantment along a host of postsecular lines. The postsecular options under investigation in this project are particularly those that return to religious claims in general, and confessional Christian claims in particular. In this context, I look closely at variations of postsecular Christian myths of re-enchantment on offer in contemporary American poetry and prose through three writers: Christian Wiman, Marilynne Robinson, and Wendell Berry. I argue that each of these writers has articulated a confessionally Christian narrative of re-enchantment that challenges dominant forms of secularism while also taking issue with other-worldly, disembodied forms of Christianity that exhibit a low view of the material world. The choice of these authors and their arrangement in this project is not to suggest a clear aesthetic movement in contemporary American writing, but rather it is to note subtle progression in how the myth of disenchantment is challenged and myths of re-enchantment envisioned through postsecular forms of Christianity.

Doug Sikkema (2021). THE MYTH OF DISENCHANTMENT: RELIGION AND THE ENVIRONMENT IN CONTEMPORARY AMERICAN LITERATURE. UWSpace. http://hdl.handle.net/10012/16863