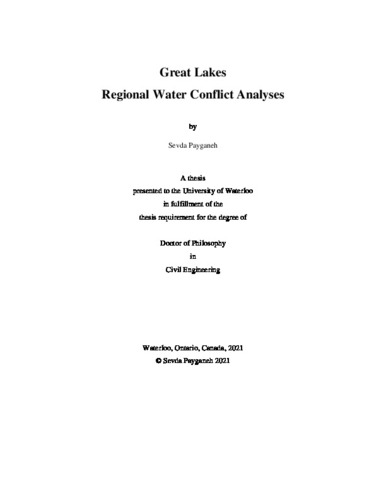 This research proposes a holistic framework to help understand and mitigate the interrelated and successive conflicts that occur over water resources in the Great Lakes and the rivers flowing into them. Local Canadian governments, in addition to many public and private companies, are heavy water consumers, who extract vast amounts of water from water sources such as the Great Lakes. Moreover, temperature changes, and increasing storm water in the past few decades, added to pollutants such as phosphorous pouring into the Great Lakes from various origins, place more pressure on these valuable, yet vulnerable water sources. Various NGOs and the states and provinces surrounding the Great Lakes strive to protect the Great Lakes from excessive water extractions and pollutants. The different priorities of the aforementioned stakeholders have become sources of various disputes. Traditional conflict resolution publications tend to focus on investigating each of the conflicts independently from the other disputes existing among the stakeholders. However, a holistic view is required to understand the conflicts, acknowledging the previous disputes, which have transpired in the past when analyzing each conflict. This broader perspective approach presents a better ability to study potential future conflicts, since it enhances the predictability of the scenarios, which might occur later during other disputes. In the first step, after identifying the relevant stakeholders associated with the Great Lakes, conflicts among them are analyzed using the Graph Model for Conflict Resolution (GMCR) approach. However, the input for each conflict's GMCR model is highly influenced by the previous conflicts' outputs. Modeling and analyzing this influence are accomplished through intricately assessing the results of the previous conflicts' GMCRs and linking them to the gathered information on the current conflict of interest. In the next step, major external variables that affect the current steady-state system are investigated. Political happenings, economic factors, social trends, technological advances, legal changes, and environmental crises are some of the key variables that are investigated. Then, several scenarios based on this external analysis of the system are proposed and utilized for enhancing future decision-making. The aforementioned steps are showcased using three case studies of disputes among the Great Lakes stakeholders. The main studied case is the Lake Erie pollution conflict which is investigated in two instances of 1970s and 2010s. It is concluded in this thesis that if the 1970s dispute had been investigated using the causal loops, GMCR, external analysis, and scenario analysis, the stakeholders, especially local authorities in the Lake Erie watershed, would have been able to make better decisions in the more recent dispute in 2010s. This research with the current holistic framework should also enhance understanding of the interrelated conflicts over essential topics such as financial, health, and environmental concerns caused by pollution (specifically algae blooms) in the Great Lakes and the rivers flowing into them. The developed understanding, in addition to the results of the conducted external analysis, should help decisionmakers, especially water utility providers, who carry a huge responsibility towards millions of water users, predict and prevent potential water disputes with other stakeholders. Although the case studies in this research focus on the Great Lakes and their stakeholders, the proposed framework is applicable in other contexts as well.