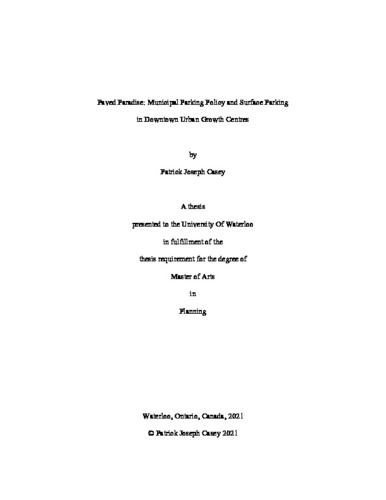 In 2006, the Province of Ontario introduced the “Growth Plan for the Greater Golden Horseshoe” (“Growth Plan”) with the goal of managing the significant population and employment growth projected for the Greater Toronto–Hamilton Area over the first three to four decades of the 21st century. The Growth Plan’s framework includes the identification of twenty-five “Urban Growth Centres” (UGCs) in the region’s local municipalities and the establishment of density targets in order to promote intensification within these UGCs. Considering the impact that public policy often has on the amount of parking provided (among many factors, related to both transportation and land use), and that this impact is connected to development and redevelopment through zoning requirements, there are two plausible but contrasting outcomes when it comes to how intensification might affect the amount of surface parking in the Growth Plan’s Urban Growth Centres. On the one hand, policies emphasizing higher-density land uses alongside reduced automobile dependence could lead to decreases in the area devoted to surface parking. On the other hand, the persistence of conventional practices, especially the imposition of minimum parking requirements, could in fact generate greater amounts of surface parking in association with increased development activity. The research project described in this report was undertaken to explore which of these two outcomes was the more likely. More specifically, the purpose of this project was to explore what sorts of relationships might exist between municipal parking policy and changes in the amount of surface parking in a sample of twelve downtown Urban Growth Centres. Changes in the area devoted to surface parking were measured by visual inspection of aerial photography and using geographic information systems (GIS) software. Policy positions were assessed by performing content analysis on the official plans and zoning by-laws of the same twelve municipalities. Both qualitative and quantitative analysis were conducted in order to identify possible points of connection between the two sets of results, which in turn could provide potentially fruitful avenues of exploration for future research. Between 2005/2006 and 2018, eight of the twelve sample municipalities saw decreases in the area devoted to surface parking in and around their UGCs: one of these eight (Kitchener) saw its surface parking area decrease by a significant amount, while the other seven saw relatively modest decreases, one (Peterborough) very close to zero. Two municipalities (Milton and Oshawa) saw significant increases in surface parking area, while two others (Brantford and Waterloo) saw the area devoted to surface parking increase by modest amounts. Within the project sample, larger-scale development projects, particularly large-format retail centres (“power centres”) are associated with the greatest increases, while a sizeable portion of the decreases observed can be traced to the conversion of surface parking lots into vacant lands. Five of the sample municipalities occupy more conventional policy positions with respect to parking—that is, their policies tend to focus more on providing automobile parking on each individual site and to regard parking as something that should be provided abundantly. The other seven municipalities in the project sample occupy positions that, to varying degrees, move away from this more conventional mindset towards positions that involve more area management–oriented approaches and attitudes that regard less parking as being necessary. Policy positions regarding the appropriate or necessary amount of parking appear to be more polarized than positions regarding geographic scope (site-focused versus area-oriented) and regarding parking as infrastructure versus parking as market good. As a general trend, municipalities that occupy less conventional positions regarding parking policy tended to see greater decreases in surface parking within their downtown areas. However, there are some apparent exceptions to this trend that point to ways in which future research can enhance our understanding of the factors affecting the stock of surface parking. There is also evidence to suggest that the establishment of an exemption area (within which land uses are exempt from minimum parking requirements) may be linked to reduced amounts of surface parking, at least within the boundaries of the exemption area itself. Parking policy reform can be pursued in a number of different ways. The methodology for assessing municipal policy positions presented here represents a valuable diagnostic tool that planners and policy-makers can use to identify which approaches to reform are more likely to succeed in a given context. Moreover, it is important that planners and policy-makers adopt more area management–oriented techniques towards parking in downtown Urban Growth Centres, and to find ways to support and encourage the replacement of surface parking with more “intensified” forms (such as underground parking facilities) in order to address automobile dependence while preserving the vitality of downtown areas in Canada’s mid-size cities.