Algorithms for Geometric Optimization and Enrichment in Industrialized Building Construction 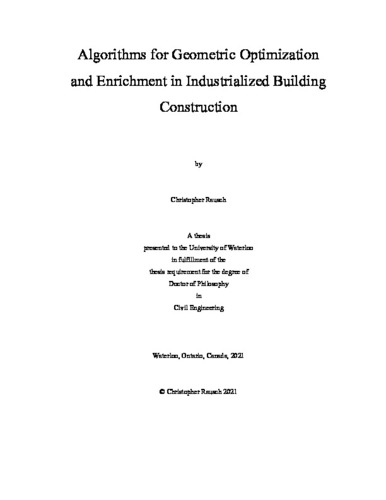 The burgeoning use of industrialized building construction, coupled with advances in digital technologies, is unlocking new opportunities to improve the status quo of construction projects being over-budget, delayed and having undesirable quality. Yet there are still several objective barriers that need to be overcome in order to fully realize the full potential of these innovations. Analysis of literature and examples from industry reveal the following notable barriers: (1) geometric optimization methods need to be developed for the stricter dimensional requirements in industrialized construction, (2) methods are needed to preserve model semantics during the process of generating an updated as-built model, (3) semantic enrichment methods are required for the end-of-life stage of industrialized buildings, and (4) there is a need to develop pragmatic approaches for algorithms to ensure they achieve required computational efficiency. The common thread across these examples is the need for developing algorithms to optimize and enrich geometric models. To date, a comprehensive approach paired with pragmatic solutions remains elusive. This research fills this gap by presenting a new approach for algorithm development along with pragmatic implementations for the industrialized building construction sector. Computational algorithms are effective for driving the design, analysis, and optimization of geometric models. As such, this thesis develops new computational algorithms for design, fabrication and assembly, onsite construction, and end-of-life stages of industrialized buildings. A common theme throughout this work is the development and comparison of varied algorithmic approaches (i.e., exact vs. approximate solutions) to see which is optimal for a given process. This is implemented in the following ways. First, a probabilistic method is used to simulate the accumulation of dimensional tolerances in order to optimize geometric models during design. Second, a series of exact and approximate algorithms are used to optimize the topology of 2D panelized assemblies to minimize material use during fabrication and assembly. Third, a new approach to automatically update geometric models is developed whereby initial model semantics are preserved during the process of generating an as-built model. Finally, a series of algorithms are developed to semantically enrich geometric models to enable industrialized buildings to be disassembled and reused. The developments made in this research form a rational and pragmatic approach to addressing the existing challenges faced in industrialized building construction. Such developments are shown not only to be effective in improving the status quo in the industry (i.e., improving cost, reducing project duration, and improving quality), but also for facilitating continuous innovation in construction. By way of assessing the potential impact of this work, the proposed algorithms can reduce rework risk during fabrication and assembly (65% rework reduction in the case study for the new tolerance simulation algorithm), reduce waste during manufacturing (11% waste reduction in the case study for the new panel unfolding and nesting algorithms), improve accuracy and automation of as-built model generation (model error reduction from 50.4 mm to 5.7 mm in the case study for the new parametric BIM updating algorithms), reduce lifecycle cost for adapting industrialized buildings (15% reduction in capital costs in the computational building configurator) and reducing lifecycle impacts for reusing structural systems from industrialized buildings (between 54% to 95% reduction in average lifecycle impacts for the approach illustrated in Appendix B). From a computational standpoint, the novelty of the algorithms developed in this research can be described as follows. Complex geometric processes can be codified solely on the innate properties of geometry – that is, by parameterizing geometry and using methods such as combinatorial optimization, topology can be optimized and semantics can be automatically enriched for building assemblies. Employing the use of functional discretization (whereby continuous variable domains are converted into discrete variable domains) is shown to be highly effective for complex geometric optimization approaches. Finally, the algorithms encapsulate and balance the benefits posed by both parametric and non-parametric schemas, resulting in the ability to achieve both high representational accuracy and semantically rich information (which has previously not been achieved or demonstrated). In summary, this thesis makes several key improvements to industrialized building construction. One of the key findings is that rather than pre-emptively determining the best suited algorithm for a given process or problem, it is often more pragmatic to derive both an exact and approximate solution and then decide which is optimal to use for a given process. Generally, most tasks related to optimizing or enriching geometric models is best solved using approximate methods. To this end, this research presents a series of key techniques that can be followed to improve the temporal performance of algorithms. The new approach for developing computational algorithms and the pragmatic demonstrations for geometric optimization and enrichment are expected to bring the industry forward and solve many of the current barriers it faces.