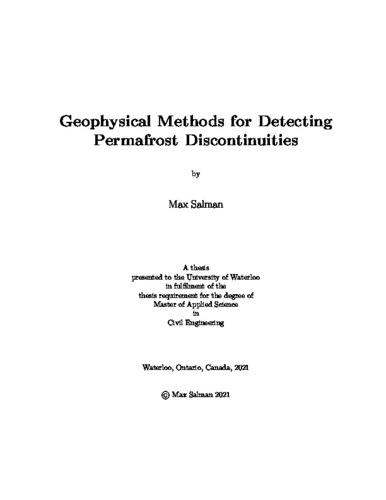 Global climate change has sparked various concerns over the future of the Arctic. One of the major concerns around the environmental and ecological health of the Arctic is directly related to the deterioration of the permafrost. Permafrost is described as frozen soil below 0oC for at least two consecutive years, and is recognized by the World Meteorological Organization (WMO) as an Essential Climate Variable (ECV). Geophysical methods have been used to detect and measure the extent of the permafrost in various cold regions of the Earth. Traditional methods such as electrical resistivity tomography (ERT), electro magnetic induction (EMI), and seismic have all been used to characterize permafrost in the subsurface. However, there are smaller scale features at the near surface requiring attention. In this work, we used of a permafrost probe, an electrical resistivity tomography system, and an electromagnetic induction system to measure the depth to the permafrost table from the ground surface. The study was performed in the Sahtu Region of the Northwest Territories, approximately 30 kilometers south of the Town of Norman Wells, Northwest Territories. Two sites were selected; one on a drill pad, one near a lake shore. The soils mainly consisted of homogeneous organic-rich till. The permafrost probe measure a depth to permafrost table of approximately 70 centimeters at the drill-pad site (MW04T) and approximately 30 centimeters at the lake shore site (Marg Lake). A Syscal Junior 48TM ERT system was installed perpendicular to the topological features, such as the lake shore, and the tree line. The electrode spacing was small due to the shallow nature of the permafrost, and the dipole-dipole method was selected to collect measurements. The ERT data was inverted using Res2DInvTM and the output data correlates well with the permafrost probe measurements. A ground conductivity meter (GCM) was used to assess the capability of using a non-ground-coupled geophysical methods in this terrain to detect permafrost discontinuity. We deployed the Geonics EM-31TM and EM-34TM systems. The electrical data was collected over the same permafrost probe and ERT survey lines and measurements were plotted using MATLABTM. The data suggest that the GCM systems were able to e ectively detect the change in permafrost table depth, correlative todirect measurement of permafrost depth that were used concurrently. This study serves as a baseline analysis of using small-scaled ground-based geophysical systems to detect permafrost discontinuities in this region, and informs the future development of aerial-based systems and methods to gather multiple strings of data to estimate permafrost table depth, and the integrity of the permafrost.