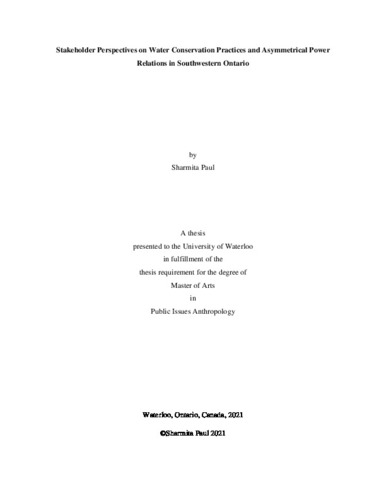 Abstract This thesis focuses on the politics of freshwater conservation and its impacts on water access, distribution, and management in Southwestern Ontario, focusing on Waterloo Moraine. It examines the role of various stakeholders involved in water governance in Southwestern Ontario and investigates whether and how the stakeholders’ perspectives and their activities impact water use, conservation efforts, and policymaking in the region’s water governance. Therefore, this study specifically asks whether and how the various socio-political and economic factors in the region shape stakeholder’ attitudes and inform their role in shaping social movement, public perception and policymaking in the water governance of Southwestern Ontario. The Waterloo Moraine, a significant natural drinking water resource in the region, has been impacted adversely due to the growing technological advancement, industrial and economic growth. The environmental hazard represented by this industrial growth has been a great concern of various activists, community members and environmentalists. In this study, I have applied a political-ecological approach to investigate the relationship among the stakeholders shaping the interaction between the environment and human beings while considering the socio-political understandings of water conservation and power politics involved in decision-making. I have engaged ten community members in this study and conducted semi-structured interviews asking for their experiences, opinions, attitudes, and recommendations for water conservation of the region. Then, I have used a thematic analysis approach to analyze the narratives and identified three major stories: Bill 66, aggregate extractions, and Nestlé related to water conservation in the region. Moreover, these three stories have represented two major overlapping themes: the asymmetrical power relationship among the stakeholders and the environmental degradations caused by the region’s politics of development and economic growth. This research has found some suggestions from the local experts and community members that could set a path for further research investigating a balanced approach to the relationship among the stakeholders, ensuring their equal involvement in decision-making both economic growth and environmental well-being.