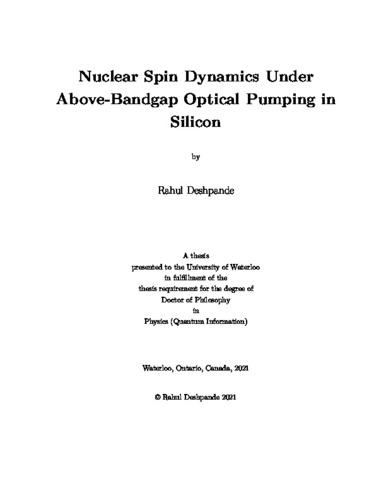 Phosphorus defects in silicon have been proposed as candidates for quantum information and quantum sensing applications, with proposals utilizing both the donor electron spin as well as the 31P nuclear spin. Initialization of the nuclear spin in its ground state (hyperpolarization) is essential for these applications. Silicon also has a spin-1/2 isotope (29Si) with 4.7% abundance. 29Si nuclear spins have long spin-lattice relaxation times compared to experimental timescales, providing a thermally isolated system whose effective temperature (polarization) can be controlled. This can serve as a test-bed for studying central spin effects and other many-body experiments. However, spin-spin interactions are relatively weak, requiring lower spin temperatures (hyperpolarization) than have been previously achieved in bulk silicon in order to see collective effects. Optical pumping with above-bandgap light (1047 nm) has been shown to drive hyperpolarization processes on the 31P as well as 29Si nuclear spins in lightly doped silicon (∼10^15 cm^−3). There are various proposals for the mechanisms driving these processes, some conflicting, with very little experimental confirmation. In the first part of this thesis, we demonstrate that the 31P nuclear spin hyperpolarization in isotopically enriched 28Si is generated by a phononic cross-relaxation process, which is accelerated and driven by the optical pumping to a different effective temperature compared to the electron spin relaxation (T1) process. We propose an experiment to hyperpolarize the 31P nuclear spins faster using AC electric fields. In addition to identifying the hyperpolarization process, we use the change in the resonance frequency of the 31P nuclear spin under an Auger recombination driven ionization process to measure the rates of ionization and photoneutralization of the defect site in the presence of above-bandgap light. The method is an example of NMR under chemical exchange. We find a paramagnetic shift on 31P nuclear spins in the ionized defect (D+) state, which has not been reported previously. In the second half of the thesis, we investigate the polarization buildup of 31P and 29Si nuclear spins in natural abundance silicon. We demonstrate that the 29Si polarization originates from the 31P defect sites, in a many-body effect where nearby (core) 29Si are polarized by a cross-relaxation process similar to that driving the 31P polarization, followed by spin diffusion to the rest (bulk) of the 29Si spins. We also experimentally confirm the existence of a 31P-29Si resonant matching field condition at 6.7 T, where the heteronuclear dipole-dipole interaction is able to exchange polarization eﬀiciently in the excited state manifold of the electron spin, and demonstrate its dependence on the laser power as well as its effect on the 31P nuclear spin polarization. We model the system using quantum simulations on small model spin systems, as well as with simplified rate equations, and show that the rate-limiting step is the buildup of polarization of the nearby (core) 29Si spins. We use our knowledge of the defect ionization rates to establish a lower bound on the spin diffusion rate across the diffusion barrier at the defect site and verify that the data is consistent with these lower bounds. The insights provided by our results suggest future experiments to create highly polarized 29Si ensembles. This might serve as a test-bed for central spin effects and other many-body experiments.