Flexible Fixtures: An Exploratory Study on the Emergence & Mobilization of the Flexible Streets Concept in Ontario Municipalities 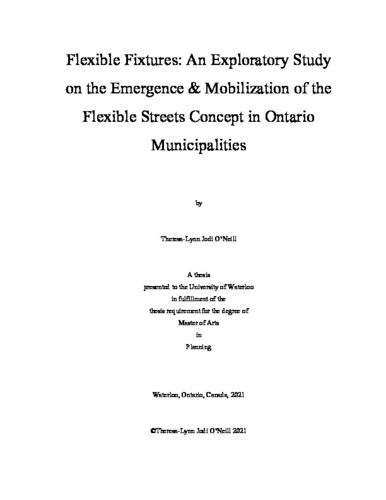 The most plentiful public space within Canadian cities are the streets; however, these spaces are overwhelmingly dominated by automobiles with much of the space designated for vehicular traffic flows. So often, the leftover space for other road users, like pedestrians and cyclists, is non-existent or inadequate. Roadway design practices have long allowed for – and exacerbated, this prioritization of transportation modes in public rights-of-way. Despite the auto centric planning and design approach common to roadways, the latter half of the 20th Century saw the origination of non-traditional design approaches that sought to reimagine streets as spaces where pedestrians and cyclists were equals. Recently, there have been a number of streetscape redesign projects implemented in Ontario referred to as flexible streets. This particular design concept was not well-known, nor had it been addressed in academic literature. The purpose of this study was to explore the flexible streets design concept and how such streetscape projects are being implemented across municipalities in Ontario, Canada. Through an exploratory qualitative research design, analysis of relevant planning and design policy documents, as well as public feedback was undertaken. Considered against the backdrop of long-time automobile priority in roadway design, this research found that flexible streets are a unique streetscape design approach stemming from the Shared Streets concept most common in the United Kingdom. Flexible streets are a relatively new streetscape design approach compared with other non-traditional street design concepts. The distinguishing features of flexible streets uncovered though this research include the intention of facilitating a street that provides equitable space and safety for all types of users, including pedestrians of all abilities, cyclists, and automobiles. Flexible streets were evidenced to be implemented in the downtown areas of Ontario municipalities with the express intention of being more than simply a transportation conduit. It is a distinct design concept that endeavors to create modular streetscapes that can easily transition into expansive public spaces for uses such as community events or expanded patios for restaurants. Lastly, conducted in the midst of the COVID-19 pandemic and resurgence of the Black Lives Matter movement, this work is reflected upon given both public health and racial justice concerns as streets are public spaces where these issues have been particularly visible.