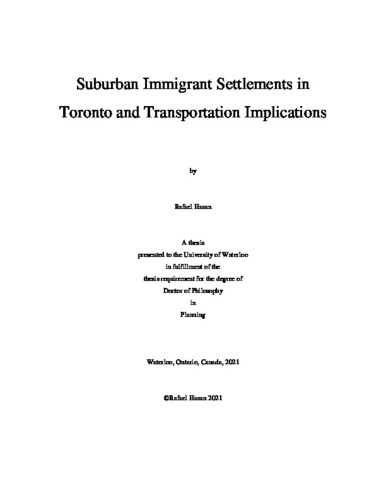 Immigrants’ social and economic conditions and lifestyles are strong determinants of their residential and transportation choices. Existing studies that analyze immigrants’ transportation behaviour have predominantly focused on a range of socioeconomic factors, yet, they have not accounted for the impacts that the residential patterns of immigrants may have on transportation outcomes. Understanding the spatial settlement patterns of immigrants is critical for learning their travel patterns. Immigrants substantially differ from non-immigrants in the dynamics of residential and transportation decisions. Also, the choice of commuting modes in immigrant neighbourhoods may vary because of the differences in built environment conditions, access to quality transit, and socioeconomic characteristics of the residents. By investigating the Toronto metropolitan region, this dissertation explores the impacts of immigrants’ spatial settlement patterns on their transportation outcomes through three research articles. It makes theoretical and methodological contributions to the immigrant settlement and transportation literature. The first research article evaluates the inter-metropolitan-zone variations in immigrant-transportation relationships. Spatially explicit regression models are developed for the Toronto census metropolitan area (CMA) and its three metropolitan zones (inner city, inner suburb, and outer suburb). They compare and contrast the associations between the immigrant concentration levels in the census tracts (CTs) and commuting modal shares while controlling for socioeconomic and built environment factors. Results of the models show that immigrants register strong association with transit use at the CMA level and in each metropolitan zone, where the level of the association is much stronger in the suburbs compared to the inner city. This article detects disproportional transit reliance among immigrants in many areas, such as in Toronto’s suburbs, that are poorly served by transit, and reflects on the reasons and consequences of the revealed phenomenon. It suggests a demand-driven transit strategy that would involve adjusting services to the higher transit reliance of immigrants. The inter-metropolitan-zone comparison in this article adds a new spatial perspective to the understanding of immigrant-transportation relationships. The second research article uses the ethnoburb model to explore the spatial evolution patterns of immigrants by investigating the Chinese and South Asians in the Greater Toronto and Hamilton Area (GTHA). It devises a novel approach to evaluate ethnoburbs in a continuum by classifying them into three distinct categories (Nascent, Mature, and Saturated), which can be considered as different stages of ethnoburb development. The assessment of the spatiotemporal changes of the ethnoburb categories demonstrates that the settlement patterns of the immigrants in the suburbs can take different spatial forms depending on the ethnic group under consideration. The article detects a prevalent tendency among both the Chinese and South Asians to form spatial clusters. It additionally recognizes considerable differences in settlement preferences between the groups through their distinct spatial arrangements. This study methodologically advances the ethnoburb delineation process, and theoretically contributes to ethnoburb and immigrant settlement scholarship by highlighting complexities and uncertainties associated with the spatial evolution of ethnoburbs. The spatial settlement trends for the Chinese and South Asians determined in this research article has contributed towards the identification of settlement locations for the two minority immigrant groups in the third research article. The third research article compares transportation outcomes relative to the settlements of immigrant groups. Using a series of regression models, it evaluates differences in commuting patterns between the Chinese and South Asian settlements in the suburbs of Toronto metropolitan region and determines the relative influence of the proximity to quality transit on the choice of commuting modes in those areas while controlling for socioeconomic factors. Results from the models show higher transit dependence in the South Asian settlements compared to that of the Chinese. Findings from the study also suggest a stronger influence of socioeconomic factors and employment locations than quality transit on the transportation and residential choices made by immigrant groups. The article manifests unfavourable circumstances for immigrants to use transit in Toronto suburbs by identifying the dissonance among immigrants’ settlement patterns, their choice of commuting modes, and current urban planning approaches. The study advances immigrant-transportation scholarship by adding the transit quality dimension and highlighting inter-immigrant-group differences in immigrants’ settlement and transportation relationships. It makes methodological contributions as well by introducing a new day-long transit quality index for the Toronto metropolitan region. As a whole, this dissertation contributes to the understanding of immigrant-transportation relationships and ethnoburb scholarship by i) delineating ethnoburbs using a novel approach and exploring the complexity in their evolution patterns and immigrant settlements more broadly; ii) assessing the spatial dimension to the immigrant-transportation relationships; iii) examining the relative importance of the proximity to quality transit in transportation outcomes in immigrant settlements; and iv) illustrating the urban planning implications of the immigrant settlement and transportation relationships.