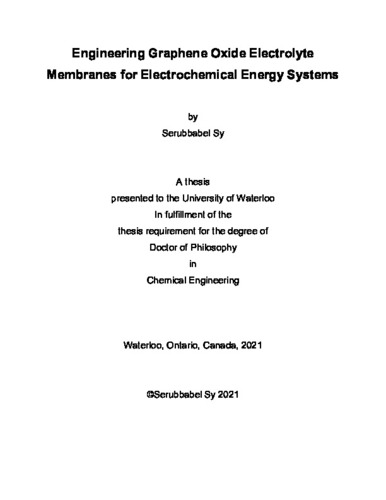 Graphene oxide (GO) is an atomically-thick, two-dimensional nanomaterial decorated with an abundance of oxygen functional materials on the basal plane and edges. Due to its unique set of properties, it is a material used in many applications including sensors, energy storage and conversion devices, healthcare, optics, etc. The tendency to easily self-assemble into large-area, thin-film membranes and to host a defect-rich surface filled with oxygen-containing functional groups, makes GO an excellent membrane candidate material for facile coordination with other materials and molecules. However, in many electrochemical systems, GO membranes lack sufficient ionic conductivity to substitute the current, state-of-the-art perfluorosulfonic acid membranes. Significant efforts have been invested in expanding the unique combination of traits that GO has to offer as a new generation of electrolyte membrane material. The primary objective of this project was to develop highly efficient, environmentally benign electrolyte membranes for electrochemical devices based on GO. To accomplish this, two different approaches were effectively implemented: (i) the development of a facile, environmentally benign, and scalable method of incrementally enhancing the through-plane proton conductivity of any GO-type membranes that utilizes GO as the base; and (ii) the complementary development of efficient and high performance GO membranes through functionalization. The properties of these new materials were investigated through (i) various physicochemical and electrochemical characterizations; and (ii) the validation of its pragmatic feasibility by prototyping the GO membranes in various electrochemical devices. The hydroxide-ion conductivity of GO membranes was improved to serviceable levels by functionalizing GO with an ionic liquid, 1-hexyl-3-methylimidazolium (HMIM). HMIM itself possesses considerable ionic conductivity with minimal dependencies on temperature and humid media. Furthermore, HMIM strengthened the mechanical and chemical stability of GO membranes enabling operation in alkaline pHs. To confirm the commercial viability in wearable devices, model supercapacitors and Zn-air batteries were constructed with the HMIM-GO membranes demonstrating improved conductivities and lesser environmental dependencies than commercial membranes. The through-plane proton conductivity and isotropy of the GO membrane was selectively enhanced by exploiting sonication-assisted (SA)-Fenton’s reaction to generate a porous morphology in GO nanosheets. The resulting porous graphene oxide (pGO) was the first reported near-isotropic proton conducting GO membrane with significant improvements in the through-plane conductivity over GO. Although pGO membranes offer an incremental improvement to GO membranes, they have demonstrated that the proton conductivity remains low due to the basis of their pristine nature. The feasibility of functionalization was evaluated with a plant extract called phytic acid (PA). PA was homogenously distributed throughout the GO membrane anchoring phytate groups onto the surface of the GO nanosheets. PA also removed and deactivated residual metal ions left by previous processes. The functional groups introduced to the material significantly boosted the proton conductivity of the GO membranes. In latter two projects, prototype alcohol fuel cell sensors equipped with all the aforementioned GO-based membranes were developed on the basis of direct ethanol fuel cell principles, exhibiting excellent sensitivity, linearity and stability. New GO electrolyte membranes were developed by tailoring the surface morphology or by functionalization. Multiple application prototypes equipped with the new electrolyte materials highlight the practicality of the next-generation development in green, high performance electrochemical devices.