Parameterizing Inanimate Agents: The Motion of a Virtual Ball and the Behaviour of a Machine-Learning Interactive System 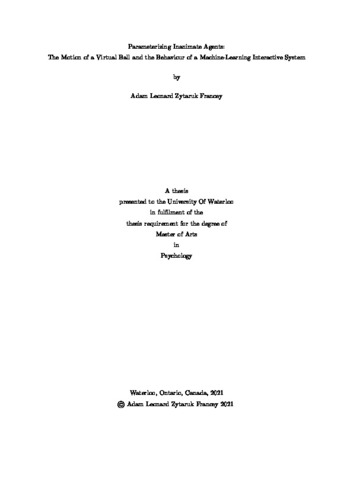 In this thesis we parameterized interactive objects and systems and investigated their effects on perceived agency. In one experiment we developed a virtual reality simulation in which the motion path of a virtual ball is parameterized by the magnitude and direction of its jerk component. Subjects classified several motions paths into animate and inanimate categories. We found that motion paths with a large jerky deviation from our definition of an inanimate zero jerk motion path, per the subject's physical point of view, are classified as animate by the subject. In another experiment, we developed a Living Architecture System whose interactive behaviours are defined by a set of modifiable control parameters. We focused on two behaviour modes which are differentiated by the usage of these control parameters: one in which static values were hand-picked to produce what we had determined to be aesthetically interesting interactive behaviour, and one in which a machine learning algorithm assumes full real-time control of each parameter with restrictions. We measured the subject's experience with skin-conductance and brain activity before and after exposure to one of the behaviour modes and follow with a questionnaire. We found that, after exposure, subjects who experienced static parameters had a decrease in skin-conductance while subjects who experienced the machine learning algorithm had an increase in skin-conductance. However, the statistically significant results of the second experiment remain inconclusive because of the small sample set.

Adam Leonard Zytaruk Francey (2021). Parameterizing Inanimate Agents: The Motion of a Virtual Ball and the Behaviour of a Machine-Learning Interactive System. UWSpace. http://hdl.handle.net/10012/16759