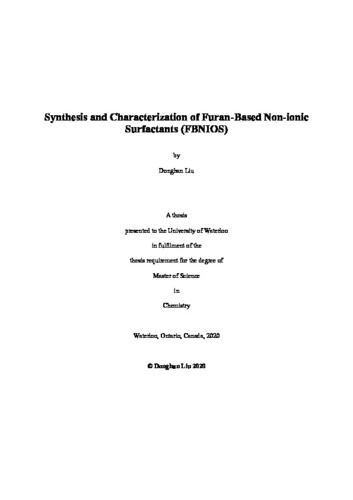 A series of furan-based non-ionic surfactants (fbnios) derived from 5-(chloromethyl)furfural (5-CMF), a feedstock prepared by Origin Materials through a carbon negative process, were prepared from commercially available 2,5-bis(hydroxymethyl) furan (2,5-bisHMF). The fbnios were synthesized by alkylating one hydroxyl of 2,5-bisHMF by Williamson ether synthesis and ethoxylating the other hydroxyl to generate an oligo(ethylene oxide) (OEO). Through systematic variations in the OEO length achieved by anionic polymerization, and the use of octyl and dodecyl groups, fbnios with different hydrophilic-lipophilic balances (HLBs) were synthesized. The number-average degree of polymerization (DPn), and purity of the fbnios samples were determined by proton nuclear magnetic resonance (1H NMR), gel permeation chromatography (GPC), and matrix-assisted laser desorption ionization-time of flight-mass spectroscopy (MALDI-ToF-MS). The amphiphilic properties of these fbnios were characterized by surface tension and fluorescence measurements. Surface tension was applied to determine the efficiency and effectiveness of the fbnios. The critical micelle concentration (CMC) of fbnios was determined by both characterization methods. The CMC of the fbnios prepared with an octyl chain was found to decrease about 3-fold upon increasing the DPn of the OEO block from 3 to 14. The length of the OEO block had less influence on the CMC of the fbnios series prepared with a dodecyl chain. In contrast, the alkyl chain used to prepare the fbnios was found to affect their CMC, the CMC of the fbnios with an octyl chain being more than one order of magnitude larger than the CMC of the fbnios with a dodecyl chain. The range of CMC values found for the fbnios prepared in this thesis covered the range of CMCs found for well-known non-ionic surfactants (nios) such as the Triton X or Brij surfactant families. The fbnios with a dodecyl chain were found to have lower CMCs than the Brij surfactants prepared with the same alkyl chain. In summary, fbnios appear to behave as typical nios and show promising amphiphilic properties.