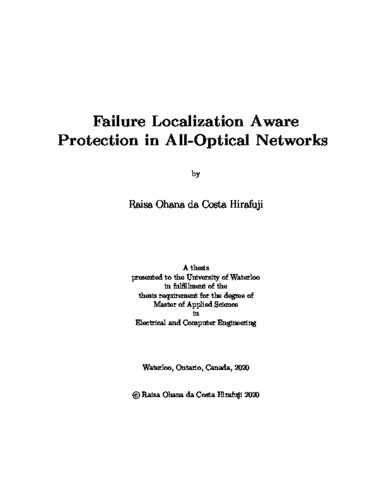 The recent development of optical signal processing and switching makes the all-optical networks a potential candidate for the underlying transmission system in the near future. However, despite its higher transmission data rate and efficiency, the lack of optical-electro-optical (OEO) conversions makes fault management a challenge. A single fiber cut can interrupt several connections, disrupting many services which results in a massive loss of data. With the ever-growing demand for time-sensitive applications, the ability to maintain service continuity in communication networks has only been growing in importance. In order to guarantee network survivability, fast fault localization and fault recovery are essential. Conventional monitoring-trail (m-trail) based schemes can unambiguously localize link failures. However, the deployment of m-trail requires extra transceivers and wavelengths dedicated to monitoring the link state. Non-negligible overhead makes m-trail schemes neither scalable nor practicable. In this thesis, we propose two Failure Localization Aware (FLA) routing schemes to aid failure localization. When a link fails, all traversing lightpaths become dark, and the transceiver at the end node of each interrupted ligthpath issues an alarm signal to report the path failure. By correlating the information of all affected and unaffected paths, it is possible to narrow down the number of possible fault locations to just a few possible locations. However, without the assistance of dedicated supervisory lightpaths, and based solely on the alarm generated by the interrupted lightpaths, ambiguity in failure localization may be unavoidable. Hence, we design a Failure Localization Aware Routing and Wavelength Assignment (FLA-RWA) scheme, the Least Ambiguous Path (LAP) routing scheme, to dynamically allocate connection requests with minimum ambiguity in the localization of a link failure. The performance of the proposed heuristic is evaluated and compared with traditional RWA algorithms via network simulations. The results show that the proposed LAP algorithm achieves the lowest ambiguity among all examined schemes, at the cost of slightly higher wavelength consumption than the alternate shortest path scheme. We also propose a Failure Localization Aware Protection (FLA-P) scheme that is based on the idea of also monitoring the protection paths in a system with path protection for failure localization. The Least Ambiguous Protection Path (LAPP) routing algorithm arranges the protection path routes with the objective of minimizing the ambiguity in failure localization. We evaluate and compare the ambiguity in fault localization when monitoring only the working paths and when monitoring both working and protection paths. We also compare the performance of protection paths with different schemes in regards to fault localization.