Conjugated Polymers Having Indolin-2-one Side Chains for Organic Electronics 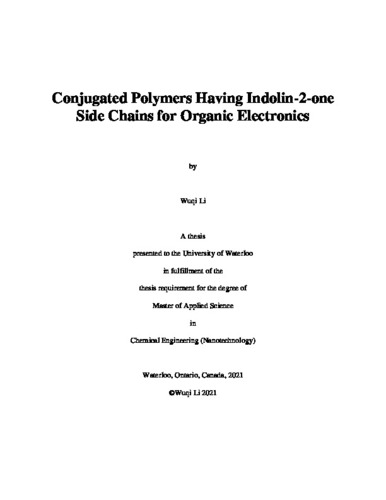 It is of great significance to develop π-conjugated semiconducting polymers for various kinds of printed organic electronics applications such as organic solar cells (OSCs) and organic field-effect transistors (OFETs). Solar energy has been regarded as crucial clean and sustainable energy resources to address the growing worldwide energy crisis and replace traditional fossil fuels to reduce the carbon emission and protect the environment. OSCs or organic photovoltaics (OPVs) that can directly convert sunlight to electricity, have shown be advantageous due to their light weight, low cost and high potential to manufacture devices with large area by solution-processable printing technologies. Recently, it has been reported that many OSCs comprised of non-fullerene acceptors (NFAs) and wide-bandgap donor polymers (WBGs) have achieved high power conversion efficiency (PCE) of over 17%. Nevertheless, there are still some issues that hinder the commercialization of OSCs. The high synthetic cost of organic semiconductor materials and the use of toxic processing solvents are problems to be solved urgently. Indolin-2-one is a well-known π-conjugated building block, which is found in natural dyes and pigments such as indigo dye and Tyrian Purple. Recently, indolin-2-one has been used as an electron withdrawing or accepting moiety in numerous high performance polymer semiconductors for OSCs and OFETs. In this work, a series of Type II donor-acceptor polymers with electron donor backbone comprised of benzo[1,2-b:4,5-b’] dithiophene (BDT) and thiophene and electron acceptor side chains made of indolin-2-one were developed for OPVs and OFETs. Specifically, PTIBDT and its fluorinated counterpart PTIFBDT were synthesized via the Stille-coupling polymerization method, which have wide optical bandgaps around 1.9 eV, thereby achieving complementary light harvesting with an NFA material ITIC. Both polymers have a low-lying highest occupied molecular orbital (HOMO) energy level of ca. -5.6 eV, which may help achieve high open circuit voltage (Voc). As the channel semiconductor in OFETs, PTIBDT and PTIFBDT exhibited hole mobilities up to 0.0044 cm2V-1s-1 and 0.0026 cm2V-1s-1, respectively. When PTIBDT and PTIFBDT were used as donors with ITIC as the acceptor in OSCs, high PCEs up to 8% and 7.70% were achieved, respectively. The high PCEs were largely contributed by their high Voc of 0.97 and 1.0 V, respectively, due to their very deep HOMO levels. On the other hand, the current density (Jsc) and fill factor (FF) of devices based on the PTIBDT:ITIC and PTIFBDT:ITIC blends were relatively low, which might be partially related to the hole trapping by the electron-rich nitrogen atom in the indolin-2-one unit. This is evidenced by the very large threshold voltage (Vth) of ca. -30 V, which indicates the existence of massive hole traps in both polymers. Substitution at the 5-position of indolin-2-one with the electron-withdrawing fluorine atom in PTIFBDT in order to decrease the electron density of the nitrogen atom appeared to have little effect on reducing the Vth or the number of hole traps in the OFETs based on PTIFBDT compared with PTIBDT. Therefore, strong electron-withdrawing acetyl and propionyl substituents were directly introduced to the nitrogen atom in the indolin-2-one unit to exert a stronger effect on lowering the electron density of the nitrogen and reducing the hole traps. The resulting two polymers, PTIABDT (having acetyl substituents) and PTIPBDT (having propionyl substituents) showed similar HOMO energy levels, but lower lowest unoccupied molecular orbital (LUMO) energy levels, leading to narrowed bandgaps of 1.83 eV and 1.84 eV, respectively. The reduced LUMO energy levels indicate a significant electron withdrawing effect of the acetyl and propionyl substituents on the overall reduction of the electron density of the nitrogen atom and the indolin-2-one side chain. As expected, OFETs based on PTIABDT exhibited very small Vth (less than 2 V), indicating that the number of hole traps in this polymer has been greatly reduced. The devices also showed much increased hole mobility of up to 0.015 cm2V-1s-1. Surprisingly, OFETs based on PTIPBDT did not show a reduction in Vth in comparison with PTIBDT (having methyl substituents). Thermal gravimetric analysis (TGA) of PTIPBDT revealed that the propionyl groups are thermally unstable, which started to decompose at ca. 100 C. Since this polymer was synthesized at 90 C for 18 hrs, some of the propionyl groups might be lost during the polymerization process. The nitrogen atoms without the propionyl substituents would act as hole traps, which might explain the large Vth and rather low hole mobility of 0.007 cm2V-1s-1 compared with PTIABDT. Although the OFET performance was improved, OSCs based on PTIABDT:ITIC and PTPBDT:ITIC showed low Jsc and FF, resulting in rather low PCEs of 3.99% and 3.29%, respectively. Replacing ITIC with IT-4F, the OSCs based on PTIABDT:IT-4F showed a slight improvement in PCE of up to 4.48%. The poor OSC performance for both polymers might be due to the low crystallinity of polymers and poor morphology of the polymer blends. Lastly, a water-soluble conjugated polymer based on isoindigo (ID), PIDBT, has been developed to avoid the use of toxic halogenated solvents for processing the OSCs and OFETs. It was found that introduction of butyl sulfonate group on ID could make ID monomer and the resulting PIDBT polymer water-soluble, which has the potential for fabricating OSCs and OFETs using water as the processing solvent.