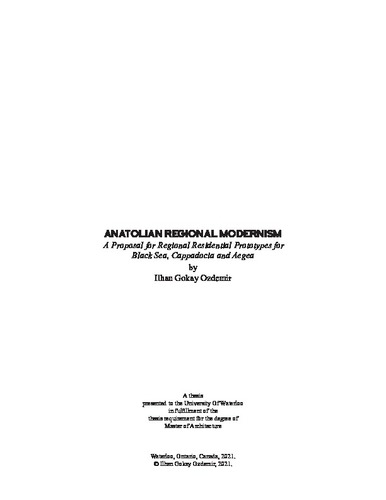 Located at the convergence point of European and Asian continents, Anatolia has been a melting pot of cultures, peoples, and architecture. Traveling through the land, one can witness a wide spectrum of history on display, from pre-historic Gobeklitepe to the legendary city of Troy, grid-planned Miletus to affluent Roman capital of Ephesus, early monastic Christian settlements to the apex of Islamic architecture in works of Sinan. Despite this wealth of culture or perhaps partially as a result of it, Anatolia suffers a form of confusion around cultural identity. Exacerbated by the necessary but equally rapid and strict modernization of the young Turkish Republic of the 1920s; disruptions and gaps in the continuity of Anatolian culture are all too evident, especially in the built environment. It could be argued that the well-meaning but sternly applied modernism of this era led to a questionable level of success, as rural masses moved into their minimalist apartments without necessarily adapting the lifestyle changes that come with it. The discord between the maintained cultural life and the daily life proposed by the built environment comes into high contrast when apartment dwellers would take over the pavement to air wool blankets or enclose modern balconies to dry spices and pickle vegetables. This clash is observed and encapsulated by Paul Ricoeur in History and Truth as follows: “The phenomenon of universalization, while being an advancement of mankind, at the same time constitutes a sort of subtle destruction, not only of traditional cultures, which might not be an irreparable wrong, but also of nucleus on the basis of which we interpret life, what I shall call in advance the ethical and mythical nucleus of mankind.” In this context, Anatolian Regional Modernism is a study of Anatolian culture, architectural typologies and tectonics, from archeological and vernacular evidence to anchoring academic work of Sedad Hakki Eldem. This research guides site visits to three Anatolian regions, Black Sea, Cappadocia and Aegea. The academic research and first-hand experience are then translated into architectural form in three residential prototype proposals for the three regions. The goal of these proposals is to suggest a methodology that shares a common architectural logic based on unique Anatolian characteristics while optimizing each prototype for their local climate, materials and culture in a “Critical Regionalist” fashion.