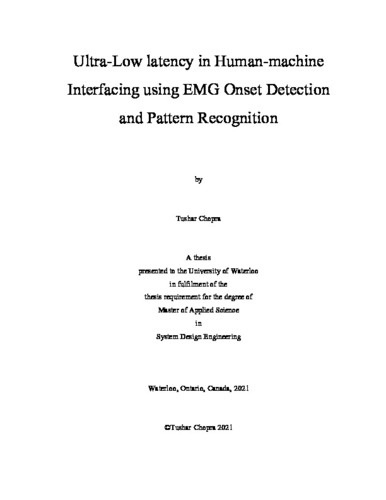 The research and development of advanced human-machine interfaces (HMI) have seen a significant surge during the last decade. These HMIs are gradually started to be integrated into our lives. Electromyography (EMG) is one of the types of signals which play vital roles in these HMIs. It is the electric manifestation of skeletal muscular activity. Traditionally, EMG processing is done by a sliding window-based paradigm, and the time windows used are usually in the order of several hundred mslong. This processing paradigm inevitably results in significant delay such that real-time detection of muscular onset with latency smaller than 10 ms is not possible. This long delay makes it difficult, if not impossible, for sEMG to be applied in many HMI applications where sufficiently short interaction delay is essential, such as virtual reality (VR), augmented reality (AR), and augmentation-on-demand exoskeleton. This study investigated the viability of reducing PC mouse-click delay using surface Electromyography (sEMG) in Human-Machine Interface (HMI) applications. We examined three different real-time processing methods for sEMG onset detection along with a pattern recognition method for ultra-short latency. A PC mouse click protocol was used as the experimental setup, in which the participants were asked to perform both left and right mouse clicking tasks using their index and middle fingers. Surface EMG signals from the dorsal interossei muscles of the participants were acquired by dry sEMG electrodes. Teager–Kaiser Energy Operator (TKEO), root-mean-square (RMS), and a new onset detection method called Divergence Estimator (DE) were used to detect sEMG onset from one EMG channel. For the pattern recognition method a binary-class scenario was used: 'Click’ class and ‘No-Click’ class. The results showed that the proposed DE, combined with the binary classification approach, outperformed all other combinations of feature extraction methods and threshold detection or classification. The detection performance (F1-scores) of binary-classification were 0.87 and 0.88 for the left and right-click, respectively, which were significantly better v (p<0.05) than all other onset-detection methods. Some detections were approximately 45 milliseconds ahead of the mouse button clicks of a top-of-the-line professional gaming mouse. Moreover, in different noise scenarios, our proposed method outperformed (p<0.05) TKEO and RMS for EMG onset-detection. The outcomes in the current study demonstrated the possibility of using sEMG to establish an ultra-short latency human-in-the-loop human-robot interface, in which human motor intentions can be predicted in real-time before overt mechanical human movements occur.