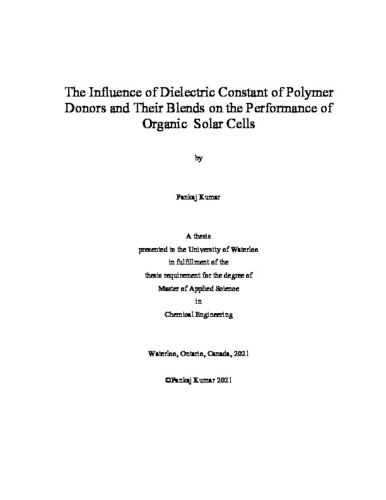 Organic solar cell (OSC) is a promising photovoltaic technology because the optoelectronic properties of the organic materials can be easily tuned, which allows for constant improvement in the device performance, material cost, and processability. Although significant progress has been made and power conversion efficiency (PCE) of over 18% has been achieved, there is still room for improvement and for potentially bridging the gap between organic and inorganic solar cells in terms of efficiency. For example, the low dielectric constant of polymer donors used in the active layer of the OSC leads to the formation of tightly bound excitons (electron-hole pairs still under Coulombic attraction) which might lead to high exciton binding energies (Eb), thus increasing the recombination losses and lowering the overall device performance. However, enough attention has not been paid to the role of the dielectric constant of the neat polymer films and their blends with non-fullerene acceptors in OSC devices. In this study, the exciton binding energies of six polymer donors (three commercial and three synthesized in our lab) are measured using photoconductivity quantum efficiency measurement. Then, the dielectric constants (εr) of these polymers are measured to explore their relationship with the Eb. A lack of correlation between εr and Eb was found and therefore, suggesting that increasing the dielectric constant (using fluorination, etc.) need not necessarily decrease the Eb of polymer donors. After studying the effects of molecular structure on the measured εr and Eb, the effects of (i) processing conditions (thermal annealing and addition of 1,8-diiodooctane (DIO) additive in blends), and (ii) dielectric constant of donor polymers, on the blend dielectric constants were investigated. The changes in VOC and FF have been mainly focused on since they are directly influenced by the donor/acceptor material properties (specifically, Eb and εr) and the changes in active layer morphology. It is found that the effect of processing conditions on the dielectric constants of blends is minimal. Moreover, increasing the dielectric constant of the polymer donor and non-fullerene acceptor, might not necessarily lead to an increased dielectric constant of the blend, and small changes in dielectric constants do not show visible effects on the device performance parameters.

Pankaj Kumar (2021). The Influence of Dielectric Constant of Polymer Donors and Their Blends on the Performance of Organic Solar Cells. UWSpace. http://hdl.handle.net/10012/16736