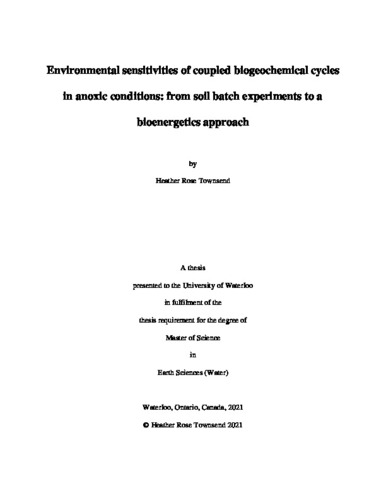 The ongoing displacement of climate zones has aggravated warming effects at regions from mid- to high-latitudes, affecting terrestrial organic carbon (C) stores. Amplified effects of warming occurring through the winter season within these regions are anticipated to alter physical and biogeochemical soil processes, thereby influencing greenhouse gas (GHG) emissions as well as dissolved organic carbon and nutrient concentrations during thaw events. Fluxes of GHGs, namely carbon dioxide (CO₂), methane (CH₄), and nitrous oxide (N₂O), and dissolved porewater species, are derivative of the energetic needs of the microorganisms who facilitate their production and consumption. Changes in the thermodynamic favourability of microbial reactions may vary seasonally and regionally with temperature and chemical energy availability (e.g., reactant availability, pH), influencing the biogeochemical transformation of nutrients, associated products, and the rates of redox reactions. This thesis presents experimental and theoretical results that provide insight into the geomicrobial reaction network present in mid- and high-latitude ice-covered soils during the winter as well as environmental and thermodynamic controls the reactions. In this thesis, Chapter 1 discusses how land-use management changes may influence anaerobic redox reactions mediated by microorganisms under warming climate conditions exacerbated during the winter season. The role of soils in a warmer world and land-use management changes are discussed under a bioenergetics lens regarding climate feedback (e.g., GHG emissions) and changes to water quality for microbially mediated reactions. Specifically, the unique (hydro)biogeochemical environment of climate-vulnerable northern wetlands is examined with changes to soil-freezing processes. In Chapter 2, the effects of chemical energy availability on anaerobic biogeochemical cycles are explored using a factorial design sacrificial-batch experiment that simulates the closed, low-temperature (non-frozen) winter subsurface environment. To simulate chemical fertilizer additions and the chemical effects of increasing freeze-thaw cycles, soil samples were amended with variable combinations of excess nitrate (NO₃⁻), sulfate (SO₄²⁻), and glucose (C₆H₁₂O₆). During the 50-day incubation period, temporal concentrations of headspace CO₂, N₂O, and CH₄ were measured in addition to changes in the porewater pH and concentrations of e⁻ acceptors and donors (e.g., NO₃⁻, SO₄²⁻, ammonium, and acetate). Stable acetate concentrations were achieved after ~21 days of incubation producing peak CH₄ concentrations, which quickly diminished via oxidative consumption to CO₂. Anaerobic oxidation of methane and ammonium (AOM and anammox, respectively) reactions coincided with a significant increase in porewater pH and increasing concentrations of NO₃⁻ and nitrite (NO₂⁻). Thermodynamic calculations combined with solid-phase data reveal a syntrophic relationship between dissimilatory denitrification, anammox, and AOM driven by manganese (Mn) oxides. The proposed reaction network renews the terminal electron acceptors (TEAs) iron (II), and SO₄²⁻ by NO₃⁻ produced in anammox. Thermodynamic calculations support these results for anammox and AOM reactions, which are more favourable under acidic and low-temperature conditions. These results highlight the importance of the duration of anoxia to biogeochemical soil cycles and the observed syntrophic relationship between C and N under close conditions, which may limit CH₄, reducing CO₂ emissions via autotrophy, and consume dissolved NO₃⁻. In Chapter 3, CH₄ was examined as a reducing agent under anoxic conditions and the rates of AOM in various freshwater and marine environments. Previously published rates of AOM were reviewed and utilized a bioenergetic approach to develop a linear free energy relationship capable of estimating anaerobic CH₄ consumption rates using different TEAs at variable temperatures. Then, the importance of climate-sensitive environmental parameters such as pH, temperature, and salinity on microbial kinetics were explored. The bioenergetics informed framework for AOM rates presented therein is constructed using thermodynamic and kinetic factors, including an optimized temperature dependant kinetic factor, which relates the reaction rate to the microbial community’s ideal temperature range, and normalizes the maximum estimated rates. The framework is used to derive the maximum rate constants for AOM by normalizing the observed rates by the kinetic and thermodynamic factors, which are related to the standard Gibbs energies of reaction to derive a linear free energy relationship. The review of published AOM rates highlights the ongoing knowledge gaps regarding AOM that should be addressed in future studies, including the role of Mn as an e⁻ acceptor during AOM and the understudied environments where AOM is likely occurring under unique environmental constraints: soda lakes, permafrost regions, and coastal wetlands impacted by sea-level rise. This framework emphasizes the critical link between the anaerobic C and N cycles via the syntrophic coupling of anammox and AOM and emphasizes that AOM rates are constrained by the energy of the electron acceptor, and thus that thermodynamics does influence kinetics. Despite the more considerable energy constraints of AOM, CH₄ oxidation in anoxic environments is possible, and the framework developed within this chapter can be used to predict AOM rates as a function of the TEA used (e.g., temperature, pH, and CH₄ concentration). The framework can be extended in the future to account for the effects of salinity and toxicity. Observation of low AOM rates with NO₂⁻ amendments emphasize the critical link between anaerobic C and N cycles, utilizing low concentrations of NO₂⁻ derived from NO₃⁻ reduction or anammox for CH₄ consumption. Overall, this thesis highlights the importance of inorganic e⁻ donors within the environment as well as the presence of Mn-oxides and their importance to syntrophic reaction networks under changing environmental conditions. Climate change sensitive parameters, pH and temperature, were shown to have a strong influence over the energetic yield and reaction favourability for AOM and anammox, influencing the reaction rate in addition to its occurrence. Hence, in order to accurately monitor the influence of climate change and land-use management on GHG emissions and climate feedbacks, rates of AOM must be accounted for across diverse environments with variable chemical energy limitations (e.g., TEA availability).