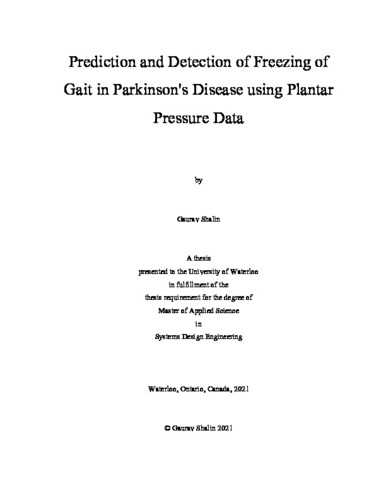 Parkinson’s disease (PD) is a progressive neurodegenerative disorder affecting movement and is characterized by symptoms such as tremor, rigidity, and Freezing of Gait (FOG). FOG is a walking disturbance seen in more advanced stages of PD. FOG is characterized by the feeling of feet being glued to the ground and has been associated with higher risks of falls. While falling can have great repercussions in individuals with PD, leading to restricted movement and independence, hip fracture, and fatal injury, even the disturbance of FOG alone can lead to decreased mobility, inactivity, and decreased quality of life. Determining methods to counter FOG can potentially lead to a better life for people with PD (PwPD). Freezing episodes can be countered with the help of external intervention such as visual or auditory cues. Such intervention when administered during the freeze has been found to alleviate the freeze and thus prevent freeze-related falls. This sheds the importance of detecting or predicting a freeze event. Once a freeze is detected or predicted, an intervention can be administered to help prevent the freeze altogether (in case of prediction) or help resume normal walking (in case of detection). Different wearable sensors have been used to collect data from participants to understand FOG and develop approaches to detect and predict it. Plantar pressure data has earlier been used in gait related studies; however, they have not been used for FOG detection or prediction. Based on the hypothesis that plantar pressure data can capture subtle weight shifts unique to FOG episodes, this research aimed to determine if plantar pressure data alone can be used to detect and predict FOG. In this research, plantar (foot sole) pressure data were collected from shoe-insole sensors worn by 11 participants with PD as they walked a predefined freeze-provoking path while on their normal antiparkinsonian medication. The sensors included IMU, EMG, and plantar pressure foot insoles; however, for the research in this thesis, only plantar pressure data were used. The walking trials were also video recorded for labelling the data. A custom-built application was used to synchronize data from all sensors and label them. This was followed by feature extraction, dataset balancing, and z-score normalization. The datasets generated were then classified using Long-short term memory (LSTM) networks. The best model had an average 82.0% (SD 6.25%) sensitivity and 89.4% (SD 3.60%) specificity for one-freezer-held-out cross validation tests. For the participants who did not freeze during the walking trials, an average 87.7% specificity was achieved. Since, FOG detection is done with the aim to provide an intervention, a freeze episode analysis was completed, and it was found that the model could correctly detect 95% of freeze episodes. The misclassified freezes and false positives were analyzed with respect to active (walking and turning) and inactive states (standing). The model’s specificity performance for one-freezer held out cross validation tests was found to improve to 93.3% when analyzing the model only on active states. FOG prediction was done afterwards, including data before FOG (labelled Pre-FOG) in the target class. The best FOG prediction method achieved an average 74.02% (SD 12.48%) sensitivity and 82.99% (SD 5.75%) specificity for one-freezer-held-out cross validation tests. The research showed that plantar pressure data can be successfully used for FOG detection and prediction. Moving away from window-based model also helped the research in reducing the freeze detection latency. However, further research is required to improve the FOG prediction performance and a bigger sample size should be used in future research.