Imitation vs. Adaptation in Canadian Mosques: The Conflicts and Challenges of Purpose-Built and Repurposed Architecture 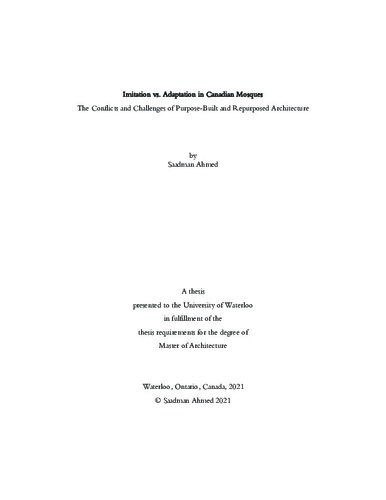 In Canada, the construction of Islamic mosques has been influenced by various cultural biases, historical interpretation, and a multitude of subtle contradictions which shape the identities of the different generations of Muslims and their communities. Mosques in Canada also face various social and political challenges including discrimination and hostility towards traditional Islamic forms and the practice of gender segregation through spatial barriers. Although historically, Islamic architecture has played a significant role in impacting architectural practices and theories, and mosques have been symbolizing the diverse Muslim cultures across the world, such challenges are detrimental to the social and architectural identities of contemporary Muslims who already suffer from a controversial past in North America. The primary objective of this thesis is to document and investigate the use, interpretation, and changing nature of mosques in Canada by analyzing them in two main categories: purpose-built (traditional) and repurposed. I argue that the variability and polarizing nature of these two types of buildings show us that mosques and Muslims in Canada are in a state of an architectural identity crisis. For traditional purpose-built mosques, my arguments are directed specifically to their expressive exterior forms which attract social and political hostility, and their aesthetics (not always consistent with the congregation’s identity) become incompatible within the landscape of Canada. The tendency of Muslims to neo-historicize exterior architectural expressions of purpose-built mosques by referencing traditional iconography, attract opposing views and prejudices in municipality meetings and in their urban settings. The practice of imitating from history also produces mosques that do not fit architecturally within their urban context and as well as discourage innovation in the field of Islamic Architecture. For mosques renovated in former storefronts, warehouses, and offices – despite the fact that their grassroots ways of adapting in such spaces arises from a necessity – their appropriated interior spaces become unsuitable for the practice and experience of the sacred and secular rituals, and their exterior identities remain camouflaged behind the façades of their former buildings. I argue that not only do these issues shape western perceptions associated with Islamic architecture, but they also reveal the socioeconomic reality of diasporic Muslims in Canada. Within the scope of this thesis, I also briefly raise and examine a few fundamental questions about the commonality between these two contrasting types of mosques: they both practice gender and other social segregation methods reflected in their architectural and symbolic expressions. Debates on the nature of inclusion and agency of women, as well as youth and converts, raises several perspectives on how diasporic Muslims refuse to relinquish their customary ways of practicing their faith, even in the land of diversity and multiculturalism, in the 21st century. Several projects such as the birth of the first Women’s Mosque of Canada in Toronto or the documentary film “Me and the Mosque” by Zarqa Nawaz, have challenged the common practice of the separation of men and women in prayer spaces. Moreover, these projects show that reform is needed both socially and in the spatial configurations of mosques in order to create a more diverse culture within the congregations. Furthermore, I will also explore some of the ways in which the Muslim communities and architects can reimagine the formal and cultural expressions of Canadian mosque architecture with John Renard’s notion of the communitarian, didactic and experiential in sacred spaces. Additionally, in order to further ground my arguments, I will be analyzing five case studies of contemporary mosques located in various cities in Canada. Lastly, in this research, I present three case studies of repurposed mosques at various scales located in the neighborhoods of Scarborough and East York in the Greater Toronto Area. The former structures of the mosques include, a suburban house, a storefront and a warehouse. I investigate how their vernacular forms respond, either effectively or ineffectively, to the needs of their congregation, their religious practices and traditions, cultural expressions and other secular programs in the buildings. Finally, I respond to some of the examined challenges and issues presented in this thesis by proposing an architectural intervention in each of the three repurposed mosques. The interventions reflect and edify the mosques’ liturgical activities of worship, the multifunctional secular programs, social inclusivity, and offer a method to uphold the cultural identities of Muslims in the contemporary societies of Canada.

Saadman Ahmed (2021). Imitation vs. Adaptation in Canadian Mosques: The Conflicts and Challenges of Purpose-Built and Repurposed Architecture. UWSpace. http://hdl.handle.net/10012/16731