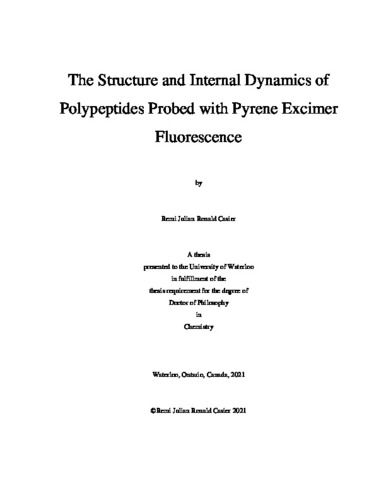 A combination of pyrene excimer fluorescence, fluorescence blob model (FBM), and molecular mechanics optimizations (MMOs) was applied to characterize a series of pyrene-labeled polypeptides. Analysis of the fluorescence decays with the FBM yielded information on the number (Nblobexp) of amino acids (aa’s) contained within the volume of a blob and the rate constant (kblob) at which two aa’s labeled with pyrene encountered one another inside a blob. The Nblobexp value was used as a structural parameter which was compared to the Nblobtheo value obtained from MMOs conducted on constructs of pyrene-labeled polypeptides to determine the conformation adopted by the rigid polypeptides in solution. The relationship that exists between Nblobexp and macromolecular conformation was established by using a series of pyrene-labeled homopolypeptides, namely poly(L-glutamic acid) (PLGlu), poly(D,L-glutamic acid) (PDLGlu), and poly(L-lysine) (PLL). The coiled conformations of PDLGlu and PLL yielded the smallest blob sizes, and thus the smallest Nblobexp values, due to their elongated conformation on the length-scale of a blob. Nblobexp was found to be significantly larger, when PLGlu and PLL adopted an alpha-helical conformation, indicating that the blob size was directly related to conformational density. This information was then used to identify the unknown conformation of PLGlu in DMSO and determine the interhelical distance in bundles of PLL alpha-helices. To study the effect of ionic interactions, the protonated and deprotonated forms of PDLGlu and PLGlu were compared. Nblobexp was found to remain constant, indicating that the temporal window provided by an excited pyrene was sufficient to study the rigid polypeptides even when their dynamics were slowed by the repulsion of like charges. Next, the effect that the aa sequence had on Nblobexp and the internal dynamics (kblob×Nblobexp) of a coiled polypeptide was investigated. To do this, a series of pyrene-labeled copolypeptides were synthesized through the ring opening polymerization of the N carboxyanhydride monomers obtained from racemic mixtures of glutamic acid and either glycine, alanine, or carbobenzyloxylysine (Lys(Z)) to yield PGlyGlu, PAlaGlu, and PLys(Z)Glu, respectively. Both Nblobexp and kblob×Nblobexp increased with decreasing aa’s side chain size (SCS). This indicated that the reduced steric hindrance generated by the smaller SCSs increased the internal dynamics and conformational freedom of the polypeptides. The effect, that the degree of comonomer incorporation had on the chain dynamics and internal density of polypeptides, was determined with a series of PAlaGlu samples prepared with alanine contents between 24 and 58 mol%. The constant Nblobexp value obtained with these samples suggested that the blob size was independent of the comonomer composition and instead depended only on the presence of a few small aa’s. Lastly, the relationship between Nblobexp and the side chain length (SCL) linking pyrene to the polypeptide was determined using a series of PDLGlu and PLL samples adopting a coiled conformation. This allowed for the quantitative determination of the contribution of the pyrenyl label to Nblobexp. After correcting for its contribution and taking into account the effect of SCS and SCL on Nblobexp, a program was implemented to estimate the blob size of each aa depending on the aa sequence in a heterogeneous polypeptide, such as a protein. This program was employed to determine the folding time of 145 proteins segmented into blobs. Comparison of the calculated and experimental folding times yielded a correlation coefficient of 0.73, demonstrating the ability of blob-based approaches, such as the ones described in this thesis, to predict the folding time of proteins. In summary, this thesis has introduced a novel blob-based approach to predict the folding time of proteins based on parameters that can be determined experimentally from the use of pyrene excimer fluorescence and racemic polypeptides. It opens an alternate path toward developing a better understanding for proteins on how to fold graciously (C. Levinthal).