Social Resilience to Flooding: The Implications of Scale 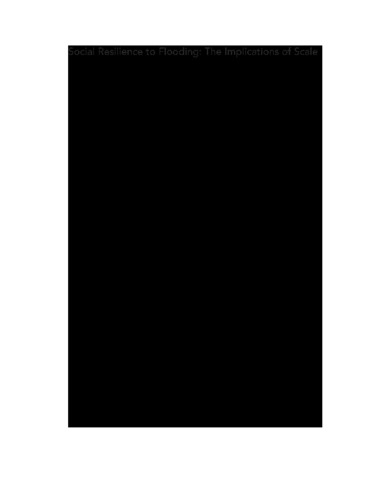 Resilience to environmental hazards refers to the capacities and abilities to resist, adapt and recover from the impacts of a potential hazard, such as flooding. Building resilience is increasingly recognized as a strategy to prevent exposure to hazards, reduce vulnerability to environmental risks and climate change impacts, and increase preparedness for response and recovery. Previous studies have assessed resilience to environmental hazards based on socioeconomic characteristics derived from census data, such as income, family structure, and dwelling conditions. These indicators can be combined into an index to compare geographic areas or populations to understand what makes a population resilient against flood impacts and where these resilient characteristics and populations are located. However, due to confidentiality reasons, census data are aggregated into different census units of varying scale to serve as proxies of individual characteristics. Spatial analysis of the same data using different spatial scales manifests in the modifiable areal unit problem (MAUP), where varying spatial scales can produce different, and at times, contradictory results. With the use of census data to infer population characteristics, the implications of its conjoined spatial component are often overlooked. As a result of the MAUP, the effects of scale from the use of census data may be further propagated and ultimately affect the information that is imparted from these analyses of social resilience. This research applies a mixed methods approach for investigating the implications of spatial scale when using a social flood resilience index to inform disaster risk management and climate change adaptation efforts. The methods include applying a geographic information system (GIS) and statistical analysis of the scale effects related to the MAUP, and conducting a resident survey and interviews with experts through a case study in the City of Vancouver. The Social Resilience Index (SoRI), which is derived from census data, was used to empirically identify scale effects across census programs in three cities: Vancouver, Canada; Los Angeles, USA; and Edinburgh, UK. Mapping the SoRI using different census scales and different index construction methods yielded contrasting patterns of social resilience to flooding, which has implications in both statistical and spatial contexts. Larger census units were more suitable for representing the statistical results, whereas smaller census units were more suitable for representing the spatial distribution of the SoRI. When constructing the SoRI, the stakeholder-driven multi-criteria analysis (MCA) method indicated less sensitivity to scale effects. The perspectives of residents and experts in the City of Vancouver suggest that the scale of flood resilience analysis (i.e., census scales) does not necessarily align with the scale that flood resilience is developed or built (i.e., community and individual scale). The issue of scale in assessments of flood resilience are linked to types of information that can be obtained at different scales. Quantitative metrics such as the SoRI are used to understand the differences in individual- and household-level capacities, but they do not fully capture the actions that are undertaken to develop flood resilience – nor the individual-level perceptions and needs to build resilience. The survey and interview responses revealed that building resilience in Vancouver could be directed at improving access to resources that residents require to respond to a flood, increasing awareness towards the available flood protection measures, and improving neighbourhood connections. The contrasting perspectives of flood resilience between residents and experts indicate that theoretical knowledge may not necessarily align with the perceptions of individuals in reality. This study demonstrates that assessments of flood resilience to inform planning and policy can address underlying social factors that determine the actions taken to build resilience, and not only quantify resilience based on aggregate census data.