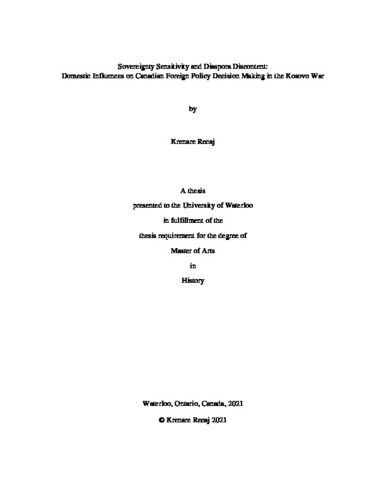 In 1999, Canada participated in NATO’s Operation Allied Force, a 78-day bombing campaign against Yugoslavia meant to end the ethnic cleansing of Kosovar Albanians. Officially, Canada’s interests in developing its foreign policy towards Kosovo were humanitarian and regional stability considerations. These were shared with rest of its NATO allies. As such, on the surface, it would seem that Canada and its NATO allies had similar concerns during the decision-making process around Kosovo. Digging deeper, an analysis of the primary sources reveals that Canada did, in fact, have a set of additional and unique considerations during the Kosovo crisis, namely national unity and diaspora discontent. This analysis, in turn, amply illustrates how interconnected domestic issues and Canadian foreign policy are. During the Kosovo War, Canada had to balance the interconnected domestic pressures of diaspora relations and national unity with their humanitarian concerns. Understanding Canada’s unique internal pressures, makes their international actions all the more impressive.