The changing influence of permafrost on peatlands hydrology 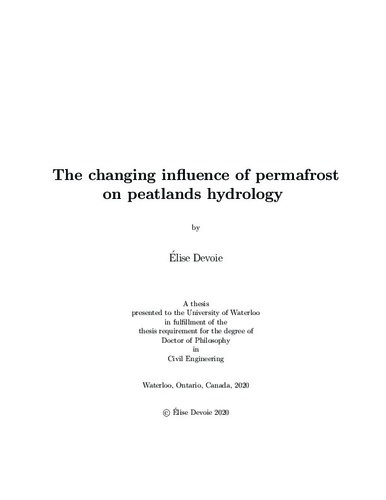 Hydrology and hydrological modelling in the far north is understudied, and many gaps exist in the current understanding and representation of northern thermal and hydrological systems. A combination of fieldwork and modelling was used to gain a better understanding of landscape evolution and thaw processes in the peatland-dominated discontinuous permafrost region of the Northwest Territories. Data collected at the Scotty Creek Research Station and modelling tools are developed and used to identify and quantify controls on isolated and connected talik formation in discontinuous permafrost peatland systems which include soil moisture, snow cover, surface temperature and subsurface lateral flow. The formation of a talik was shown to be a tipping point in permafrost degradation after which several positive feedback cycles led to more rapid permafrost loss. Given the widespread prevalence of taliks in this discontinuous permafrost peatlands environment, seasonal pressure and temperature gradients were analyzed in different talik configurations to determine the impacts of taliks on the landscape. It was found that the formation of taliks led to a balance between increased hydrologic storage due to isolated talik prevalence, and increased discharge from the basin due to connected talik features allowing previously inaccessible runoff features to be connected to the drainage network. Thermodynamically speaking, the interplay between subsurface temperature, thaw rates, subsidence, snow accumulation, canopy coverage and soil moisture were discussed supporting the idea that talik formation is a positive feedback for permafrost loss. It is also noted that the loss of permafrost causes subsidence and geophysical destabilization leading to ecosystem change and a change in greenhouse gas emission regimes. Existing models representing permafrost and other cold-regions processes are either computationally expensive physically-based models, or empirically based. This limits their predictive ability at the watershed scale or larger. Large-scale predictions of the impacts of changing climate and subsequent permafrost thaw are needed to improve our understanding of long-term evolution of semi-discontinuous permafrost landscapes. To extend predictions to this scale, a novel physically-based interface model of active layer and permafrost evolution is developed and validated against both field data and a benchmarked continuum numerical model. This simplified model is designed to be incorporated into a semi-distributed hydrological model that will be used to predict hydrologic impacts of changes in permafrost dynamics at the basin scale. This model was used to inform the current understanding of permafrost thaw mechanisms in this environment. In order to quantify the rate of permafrost loss, different parts of the landscape are classified based on the mechanisms for permafrost thaw including conduction and advection in both the vertical and lateral directions. These results help to explain the observed heterogeneity in thaw rates in the landscape. It was found that conduction is responsible for much of the thaw in the vertical direction, while advective processes do play a role in flow-through talik features. Lateral thaw is occurring more rapidly than vertical thaw, due both to conduction and advective heat transfer. Finally, thaw from below is documented both due to geothermal heat flux, and observed deep thermistor temperature profiles. The combined fieldwork and modelling efforts provide a better understanding of the rapidly changing discontinuous permafrost environment, help to predict hydrologic and landscape changes in Canada's north, and create tools which are transferable to other cold-regions environments.